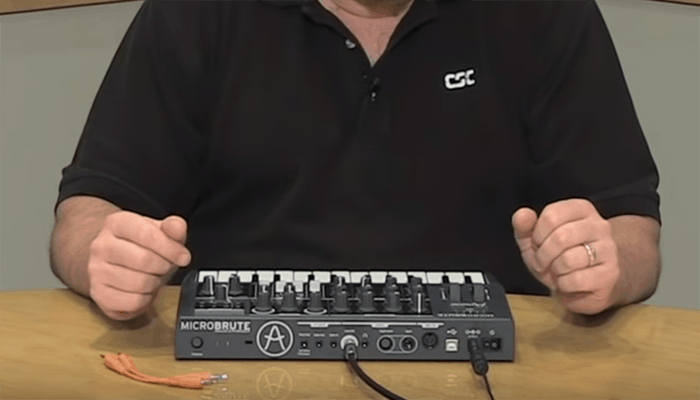 When Arturia released the MiniBrute, it was like any other modern miniature synthesizer on the market. It had excellent capabilities, but many felt it was very cluttered because of its size.

For starters, the first design decision was to do away with almost half of the controls, which instantly provides better spacing and gives it a streamlined appearance. It also facilitates a more manageable set of functions. The Mini had around 50, while the Micro sports 30.

This scaling back doesn't lessen the abilities. The MicroBrute remains chock-full of oscillation options to explore. So, hats-off to Arturia.

It feels reliable enough in your hands, with sturdy dials to twiddle. This is something that can be questionable with cheaper, smaller-scale products. Everything is on the fiddlier side, but we like that they went for 25 keys.

25 allows for natural octave progressions and is better for step sequencing. However, it's important to mention that they are not Aftertouch capable. This means the velocity sensitivity isn't as great as the previous version. We know this could be a deal-breaker for some people.

That said, it is perfectly usable, and you could run a second key-bed to it for emotive playing.

It provides all-analog circuitry, and the built-in oscillator is voltage controlled. You can select your waveform from Saw, Triangle, and Square shapes.

The signal pathing stays true to the original MiniBrute with your typical VCO to VCF to the VCA signal path. There are a few of the more detailed parameter shaping effects missing in action. That is inevitable with the downsizing.

The oscillator waveshapers featured are Ultrasaw, Pulse Width, and Metalizer. You can't manipulate them as fully because the Envelope Amount controls are no longer within this section.

The noise generator has also been removed. You still have a great overtone generator to add harmonics with. The harmonic frequency range goes from one octave below up to one fifth above, which you'll probably agree, allows for plenty of wiggle room.

The overtone modulation can be controlled manually or by using the patch bay. This creates great depth for the oscillator, adding 3rd and 5ths for a punchier chord-like sound.

The same glorious Steiner Parker filtering provides the oscillator tones and infamous character that the Mini had, with the only exception being that this micro-tribute being that has three modes instead of four. Here you have your cut-off and resonance dials, your envelope amt, and keyboard tracking.

You also have access to Arturia's Brutefactor dial. This is pretty much a feedback loop like the Moog uses for its Hammond sounds. It feeds the oscillation back in to thicken the sound and add distortion.

Your next port of call is a single ADSR envelope generator that can be controlled with the contour or the gate pulse. The LFO is pretty impressive. It has a higher rate than the previous model but has fewer waveform manipulations.

Amazingly, it also provides a miniature patch bay courtesy of its proprietary Mod Matrix. They are 1/8-inch connections rather than ¼-inch, but they still provide additional flexibility.

Having a patch bay is a big bonus for such a competitively priced piece of kit. You can expand on the modulation capabilities of generated sounds with the additional routing options.

This also helps with the LFO simplicity. You can recreate some of the more complex sounds you could achieve with the bigger model.

If you are looking to add a compact mono synth to your set-up, the Microbrute from Arturia is about as tiny as they come. Its smaller dimensions don't impede its functionality. With an all-analog set of circuitry under its hood and a reasonable build for its price range, this is an excellent value for money synth up for grabs.

It features 25 keys with pitch bend and modulation wheels. They can be transposed and provide a good interface for step-sequencing.

The mono VCO can be manipulated to a fairly high degree with the overtone generator, VCA, and VCF options. The Steiner Parker filter is a key ingredient to the sound sculpting capabilities on this micro-monster. We love the Brutefactor dial creating wild distortions when cranked.

In addition to the built-in signal pathing, you have a mini-patch bay making the MicroBrute a semi-modular piece of tech to add to your array. This opens up its capabilities and renders it a flexible addition.

- Key-bed doesn't benefit from Aftertouch like larger models on the market.

It's an all-analog, voltage controlled oscillator with three waveforms and a tiny footprint. It could be carried easily to a further-afield recording location. It has great flexibility and a semi-modular nature, thanks to its miniature patch bay. We aren't in love with the key-bed, but it is perfectly fine.