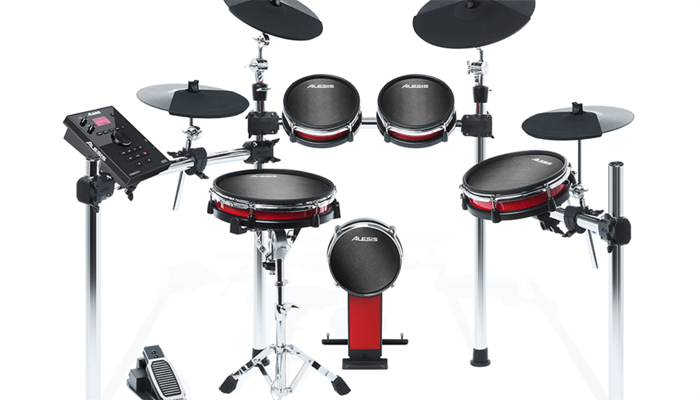 The Alesis Crimson II is a next-gen 5-piece model from Alesis' mid-range. Unlike some of the cheaper entry-level kits, Alesis offers the crimson benefits from some of the most popular features from their higher-end products that improve the playability of a synthetic set.

The 5-piece set-up features an 8" compact kick drum at the core with a pretty decent dual-response snare. It measures 12", which allows for a sufficient playing surface to house the two individual zones allowing for a range of playing styles.

The rack-mounted toms are also kitted out with dual-zones which give users creative, tonal-license. They are both 8" in diameter which in reality is a little unauthentic to an acoustic kit but is more often than not the case with most electronic kits.

The dual-zone floor tom is a little more generous at 10", and all of the drums feature miniature shells which give them great aesthetics.

Also, the 5-piece hub you get a mounted 12" hi-hat with a detached, remote pedal. You also get two dual-zone floor toms, along with a two 12" crash cymbals, and a triple-zone activated ride measuring 14".

This mainly takes your simple 5-piece to a nine-piece. The crashes and ride are fitted with a synthesized choke and have a response just about as realistic as it can get.

All are mounted with a robust 4-post rack, though the snare has its own double-braced stand and the bass drum is also independent of the rest. The post-rack features quick-lock functionality, so you can feel free to play like an animal.

It is straightforward to put together. The tom brackets and L-rods allow for a little customization in terms of adjustment. We would say the snare stand is a little shy of height adjustment and that some players might find they are out of rim shot.
On top of the hardware, you get the vital module to run it, which is very well-engineered and presents a decent variety of sounds.

It harbors 54 onboard kits as factory standard and has 20 patches for user-created ones which are all made from a total of 671 sampled sounds.

You can edit the pitch, reverb, and delay of the samples and adjust the volume levels for each and even pan-specific triggers left or right in your headphones.

Also built-in are 60 play-along tracks. In all honesty, they are comparable to a cheap keyboard demo button. They come in a range of genres and will give you something to practice to.

Fortunately, it is also equipped to connect with mobile devices, which may be more favorable.

Also, you will find a pair of stereo 1/4" outputs along with a headphone for quiet practice. You also get a USB-MIDI output allowing it to be used as a remote trigger for VST use.

The USB port allows you to input your own Wav samples; once they are loaded, you can assign them to the various trigger zones.

It also harbors a built-in metronome and is capable of real-time recording, which is a pretty advanced feature typical not seen on models below the $1000 threshold.

However, it appears you can't delete one sample at a time, only entirely which will hopefully be sorted by future firmware updates. 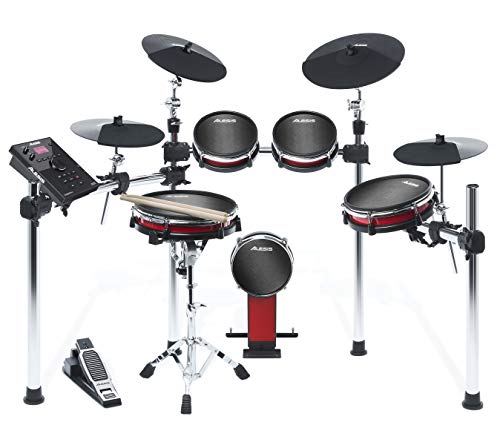 - Uncomfortable rim-shots due to the snare height.
- Issues with deletion.

It is a smaller starter kit ideal for beginners who want to be able to branch out in the future. Or, for those who haven't got a whole heap of space to set up in but still need to keep practicing.

The exclusive mesh heads give it a realistic bounce. We love that they are adjustable too. The MIDI connection allows you to hook up your computer software and means you can replicate the timbres of a kit worth considerably more. 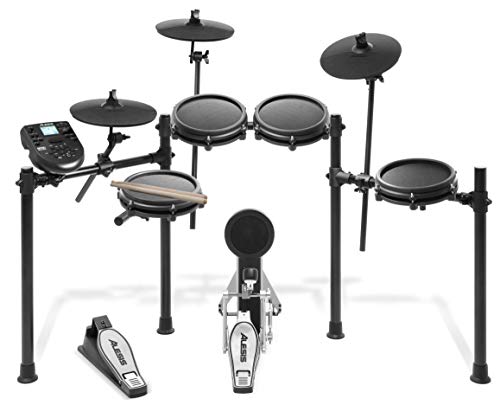