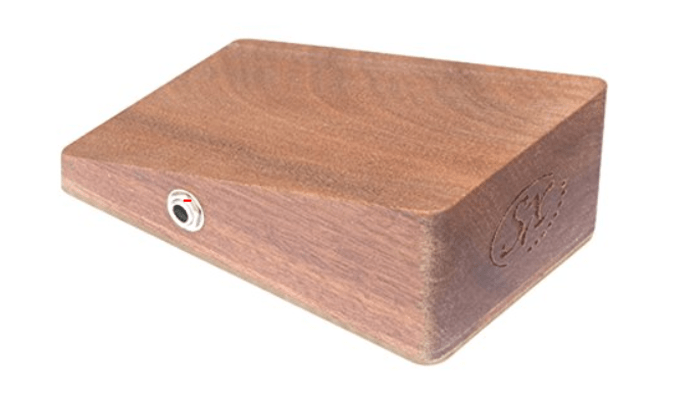 With the rise in popularity of folk and country in the charts, we have seen some Indie and other acoustic fringe groups adopting a stomp-box or Cajon in place of a full drum-kit as it helps provide a rhythm section that doesn't overshadow the quieter genres' instruments.

Throughout history stomp-boxes have generally been home-made and whilst there are many on the market, some authentic bespoke models can fetch a fair few bucks, as can their modern manufactured replacements.

The SX SBX II stompbox is a wonderful upgraded model which aims to provide a low-cost solution and whilst it doesn't compete with its premium pals, it does a pretty good job.

It has been newly upgraded to feature active circuitry unlike the passive SX SBX I original. It will require a 9-volt battery and it is wise to add a spare to your gig-bag if you are performing live.

It features a standard ¼ inch TRS (jack) output and you will need to have a second channel on your guitar amp to play the two together unless you are running both directly to a mixer and P.A. It has a condenser microphone concealed within to pick-up the signal and send it.

It is precision machined in two-parts as opposed to four which gives it better stability and durability as there are fewer joins which can become weak points.

It is designed with an idyllic angle for comfortable foot tapping the thickness of the point of the wedge comfortably tucks in your arch. It can be played in both an upright and seated position which gives it good diversity.

When playing seated you can creep a little higher up the soundboard and achieve a slightly different tonal quality.

It doesn't have a non-slip bottom like some of the more expensive models out there so you might find with some floors (especially laminate) it will need some felt or rubber added to the underside to stop it from creeping out from your clutches.

It is important to note that the sound achieved with a stomp-box, in general, is entirely dependent on the capabilities of the amp you are running it through. It can also be hindered by a carpeted venue or soft-soled shoes but the active circuitry means that the signal is given a little gain boost by the battery to help tackle these issues head-on.

Given that this bad-boy is a cheap and cheerful option the functionality is very simplistic. You stomp the mic sending the sound to the amplifier, and it is much like tapping a mic during a soundcheck.

The mic is decent quality with industry-standard frequency response, but if you require a real beefy bass beat to accompany your playing then you might want to tweak your bass and middle equalization to get a more desirable effect.

It is easy to play and adds an immediate extra dynamic to a solo acoustic guitar or ukulele performance.

The majority of players will tap their foot to keep a tempo anyway so there is little to master, though if you have a little more rhythm you can experiment with playing offbeat or doubling up during choruses to emphasize and help distinguish the song structure.

The mic has good sensitivity so you can tap it softly or stomp the hell out of it and it responds accordingly, so you can start a good old fashioned knees-up.

They are nicely presented with a choice of 3 different wood stains ranging from light, dark, and one with a slightly red tinge. They each have the companies logo carved on the back to complete the understated look.

+ Compact option.
+ Active circuitry.
+ Strong, 2 Piece design with an ergonomic angle.
+ Undercuts the retail price of the majority of stomp-boxes on the market.

- Not as punchy as some would like.
- Could benefit from a non-slip underside.

It is ideal for solo's or duos that would like to add percussive self-accompaniment to their semi-acoustic act. Especially those with a more restricted budget as some of the leading stomp-box brands will cost a minimum of double the asking price of the SX SBX II.

It is an accessibly priced compact solution which granted can't genuinely compete with the higher-priced larger boxes from top-dogs Logarhythm or Ortega still gives a tired set a little vibrancy adding much-needed dynamics.