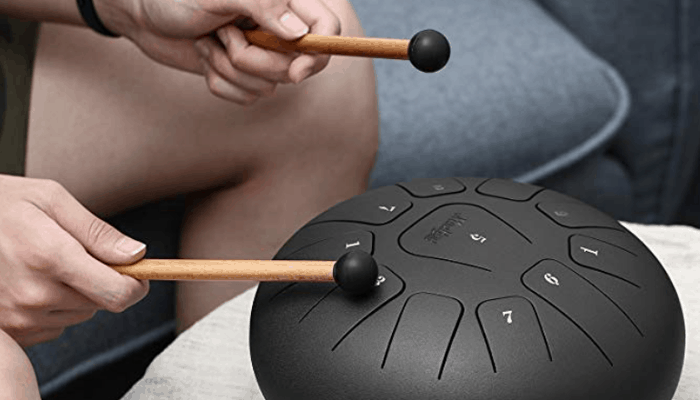 The Moukey mini-Steel Tongue Drum is a really sweet attempt at a traditional tongue drum in an affordable package.

It is made from genuine steel, unfortunately, it like many of its miniature market buddies does have a few tonal issues which could bug the hell out of those with a good ear.

For the most part, it is a beautifully presented and well-made instrument. It features 11 tongues which can be played by hand or via its free rubberized beaters. It has rubberized feet as well that lift it from the ground and allow it to resonate better.

We prefer the tones with beaters as they give the note itself far more sustain which draws attention to their best quality, their ethereal and other-worldly tonal beauty that only steel drums conjure up.

The notes can be played individually in a melodic run or struck 2 at a time to create a chord like harmonic.

However, the tongues haven't been cut quite as accurately as could be as the two lowest notes seem a little flat, and certainly duller. This is more or less forgivable given that the lackluster bass tone is partially due to the smaller size of the drum itself as it needs a wider space to reverberate in our opinion for the lower notes to sing.

It is important to note that it is entirely hand-crafted so the problem itself could differ from pan to pan ever so slightly but we would like to think that generally speaking, they offer some consistency.

The tongues can be tuned if you know what you are doing so if they are a little out as they will become over time you can adjust them by carefully applying pressure to the tongue with your thumbs pushing it inwards or opening up the back of the instrument and pushing them outwards with the beaters accordingly until they sound correct.

That said, if you don't have nitpicking ears then you may well find yourself completely oblivious but if we are honest, then this steel tongue drum is probably more of a hobbyist pan than a professional one.

The other notes ring and you can create some neat tunes with its particular tuning.

Between the 11 keys (which are tuned to D major) you can get a range of scales to play with including but not limited to D pentatonic and D Dorian.

This gives you plenty of complimentary notes, so it isn't too hard to play harmonically from the get-go with little or even no experience. The notes are numbered with an engraving so you don't need any musical knowledge to perform with it.

Steel tongue drums have a wide range of applications and are great for schools or as a sensory instrument within an educational environment. The sounds they create are considered very pleasant and relaxing so they are often used for meditation and yoga.

It comes with its own padded, protective storage case which also has an optional detachable strap adding portability to take out and about on your travels making it an excellent gap year companion.

The compact diameter of 10 inches and a height of 5.5 inches.

Free accessory bundle including a pair of rubberized drumsticks tone stickers and a carrying bag come storage case with a removable strap.

As stated previously this is ideal for budding musicians, percussionists who fancy trying something tuned and hobby players. It makes for a unique addition to an instrument collection and an ideal gift for younger players and loved ones with musical interests.

Its smaller size and carry case make it perfect for traveling with and its sweet sounds will brighten up a trip away whether it's chilling on a beach, meditating in the woods, sitting around the campfire or jamming to your heart's content.

It also has educational and sensory applications as we previously mentioned.

Bum-notes aside it has some dulcet tones onboard and plays beautifully. Steel tongue drums have a magical sound, the majority of similar options on the market don't have any more to offer in terms of tonal perfection and let's face it getting your mitts on a full-size professional one sadly isn't feasible for the majority of us.

The Best Drum Sticks for All Genres in 2021