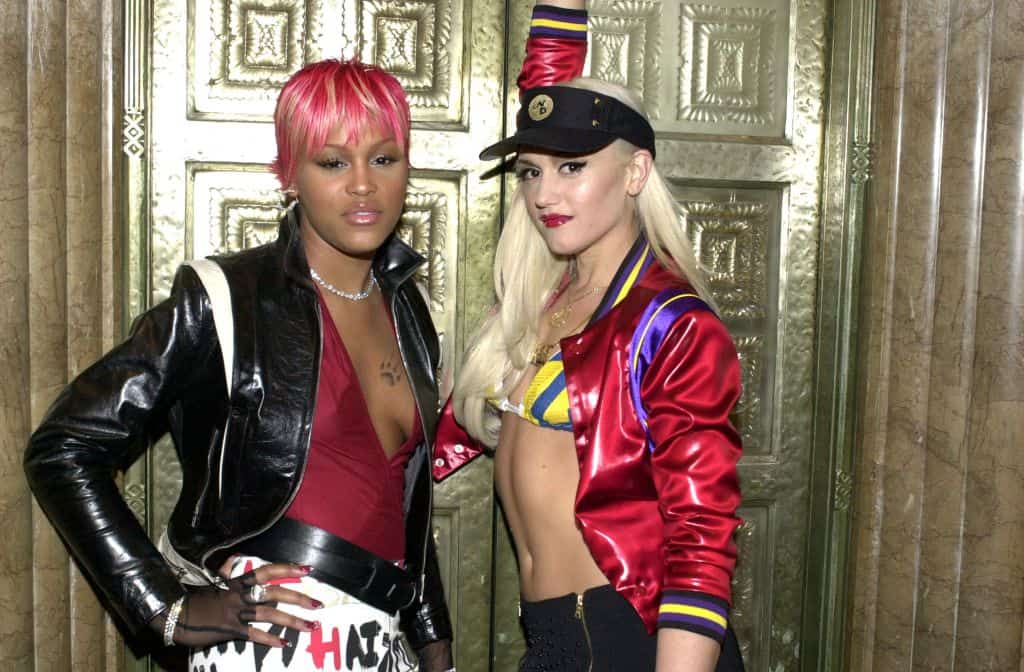 This week: "Let Me Blow Ya Mind" by Eve, featuring Gwen Stefani

[Eve]
Uh, uh, uh, huh
Yo, yo
Drop your glasses, shake your asses
Face screwed up like you having hot flashes
Which one, pick one, this one, classic
Red from blonde, yeah bitch I'm drastic
Why this, why that, lips stop askin
Listen to me baby, relax and start passin
Expressway, hair back, weavin' through the traffic
This one strong should be labeled as a hazard
Some of y'all niggas hot, sike I'm gassin'
Clowns I spot em and I can't stop laughin'
Easy come, easy go, E-V gon' be lastin'
Jealousy, let it go, results could be tragic
Some of y'all aint writin well, too concerned with fashion
None of you aint gizell, cat walk and imagine
Alotta y'all Hollywood, drama, passed it
Cut bitch, camera off, real shit, blast it

CHORUS:
[Gwen Stefani]
And if I had to give you up
It's only been a year
Now I got my foot through the door
And I aint goin' nowhere
It took awhile to get me in
And I'm gonna take my time
Don't fight that good shit in your ear
Now let me blow ya mind

[Eve]
They wanna bank up, crank up, makes me dizzy
Shank up, haters wanna come after me
You aint a ganster, prankster, too much to eat
Snakes in my path wanna smile up at me

Now while you grittin your teeth
Frustration baby you gotta breathe
Take a lot more that you to get rid of me
You see I do what they can't do, I just do me
Aint no stress when it comes to stage, get what you see
Meet me in the lab, pen and pad, don't believe
Huh, sixteens mine, create my own lines
Love for my wordplay that's hard to find
Sophomore, I aint scared, one of a kind
All I do is contemplate ways to make your fans mine
Eyes bloodshot, stressin', chills up your spine
Huh, sick to your stomach wishin I wrote your lines

[Eve]
Let your bones crack
Your back pop, I can't stop
Excitement, glock shots from your stash box
Fuck it, thugged out, I respect the cash route
Locked down, blastin, sets while I mash out
Yeah nigga, mash out, D-R-E
Back track, think back, E-V-E
Do you like that (ooooh), you got to I know you
Had you in a trance first glance from the floor too
Don't believe I'll show you, take you with me
Turn you on, pension gone, give you relief
Put your trust in a bomb when you listen to me
Damn she much thinner know now I'm complete
Still stallion, brick house, pile it on
Ryde or Die, bitch, double R, can't crawl
Beware, cuz I crush anything I land on
Me here, aint no mistake nigga it was planned on

[Eve]
(Guttural noises to express female power)
Put your drinks down and start dancing
When you hear this song, the beat will have such a powerful effect on you, your face will contort
For those of you with little musical knowledge, it's hard to decide what's classic, but I assure you this is
The fact that I changed my hair color from blonde to red makes me unpredictable
You're wasting time asking silly questions when you should be enjoying this song
Focus on the music, relax and let me inspire you
To drive carelessly on major roadways where inattentive driving can lead to disaster
In fact, my music is so potent in influential powers, it should come with a warning from the Surgeon General or a similar Federal institution
To my competitors, you're quite talented-wait, I'm just kidding
It seems I'm surrounded by weak musicians, and that makes me laugh quite hard
It doesn't take much to get a record deal these days, and after your 15 minutes of fame are up, I'll still be here
So it's not worth being jealous, because envy will get you nowhere
Lately, my contemporaries in the hip-hop genre pay more attention to their wardrobes than the quality of the music they produce
And I hate to break it to you, but you don't resemble super model Gisele Bundchen
A desire to become actors and actress has also begun to infect the music industry, but I have no interest in pursuing that kind of career
It's time to get back to reality, so listen to Ms. Gwen Stefani of No Doubt

Chorus:
[Gwen Stefani]
If I have to give you up in order to maintain my status in the hip-hop community
I won't hesitate for a second, because we've only known each other for a year and my career is more important than our relationship
I've finally managed to break through the glass ceiling that has consistently held female rappers back
And now that I'm comfortably ensconced in the industry, I don't want to give up my spot
I've paid my dues and done my time
So I'm going to enjoy this while I can
This music is too good to ignore
So allow me to give you a transcendental experience through my rapping and singing

[Eve]
My competitors are attempting to capitalize on my fame, and it's rather disorienting
For these same people, who also happen to hate me, it's not enough to be better than me at rapping; now it seems they want to hunt me down and kill me with a homemade knife traditionally used in correctional facilities
But they're fooling themselves if they think they're that hardcore; chances are they've filled their heads with foolish thoughts that have inflated their egos
Those of you who have misjudged your superiority would be well advised to show me some respect in the future

I understand my success is having a negative effect on your current stress levels
But the way you're beating yourself up is quite unhealthy
Don't blame yourself, because you wouldn't be able to eradicate me by yourself anyway
I make this look easy because I'm just being myself, thus negating the need to put forth an excessive amount of effort
I don't waste time worrying about the image I convey, because I'm quite confident my natural talent will speak for itself
If you still don't trust that I'm as good as I say, I'm willing to set up a class for uneducated rappers-don't forget to bring materials with which to take notes
Believe it or not, I write all of my own material
But rappers who enjoy my witty couplets are few and far between
I'm still young, and this is only my second record, but my unique abilities have the effect of buoying my confidence
In fact, I have enough time left over to plan ways to encourage your fans that their time would be better spent listening to my music
I can see that my success is bothering you and keeping you up nights, in some cases even making you physically ill
So much so that you're even considering asking me to ghost write the lyrics to your next album

[Eve]
Don't hold back, dance until you've almost injured yourself
At the very least, you'll be sore tomorrow, but don't blame me because I'm unable contain my excitement at having the chance to help you enjoy your night at the club
I even predict that in some instances, people will become so overjoyed while listening to this song that they will take their unregistered handguns from the compartments in which they hide them from the authorities and fire shots in a nonviolent, party-like manner
You may not think this is a bad idea because you view yourself as tough and above the law, and I actually admire this mindset
But truth be told, you'll probably end up in a penitentiary listening to my music in the weight room while I'm free and making money
So instead, keep the peace and enjoy this music responsibly
And if you listen closely, you'll notice that I've borrowed an element from a song popularized by rap pioneer Dr. Dre to give this song a catchy feel, but I've altered it enough to make it my own
Was I correct in assuming you'd enjoy this song? Don't lie, because I'm sure you're aware that I know your musical tastes as well as you do
In fact, I noticed my charisma and magnetism have held you in rapt attention
since you stepped foot on the dance floor
But please don't fool yourself into believing that I'll explain my methods for captivating a crowd's attention
I'm more comfortable with exciting you so completely that you're willing to sign over your 401-K to me
It's rather risky to put your faith in me because I can be rather volatile and unpredictable
For those who think there's less to me now that I've lost some weight, I'd like to point out that I believe I'm actually a much more complex person than I used to be
I may not seem as imposing as I did before, but don't let my stature fool you-I'm still just as tough as I was before
I still subscribe to the mantra of my close group of friends, namely the Ruff Ryders
Be careful, because I tend to damage things that get in my path
And you're foolish if you believe my success is a matter of chance

CHORUS
Note: Lyrics in break/doWns are not necessarily 100% accurate.