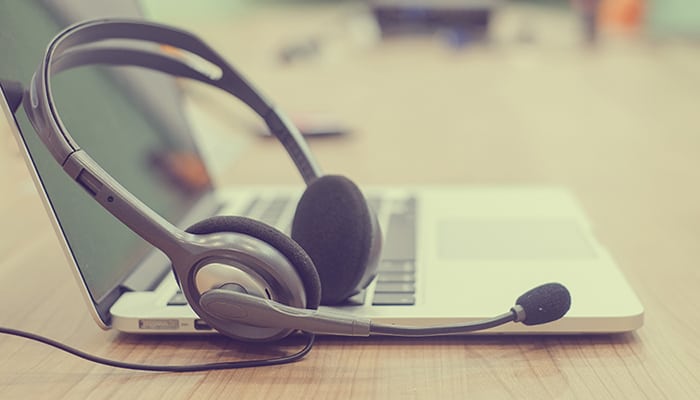 Headsets containing a microphone are great for many reasons, such as allowing efficient communication when used in an office environment, or like any offices that require workers to speak with customers and clients.

It's also great for gamers who like listening to the game's sounds or talking to other people while playing – this can be essential for creating the ultimate gaming experience.

The only problem with headsets that have a microphone is that sometimes they don't always work! The sound can be patchy or fuzzy, and the person on the receiving end of the call may find it hard to hear what you're saying – with only small bits of your voice being transmitted to them or sounds that are uninterpretable.

This problem can be annoying for both you and the other person. It can lead to constant – 'can you say that again please' – throughout your conversation. And nobody wants that!

Different types of microphones can be built into your headset. Some will have additional features, like noise-canceling technology.

This feature is ideal for office workers in a large office with other people talking throughout the day. But not only that - it can be good for all users. It reduces the sound of anything in the environment, so if you're having DIY work carried out in your home or the TV is loud in another room, the noise-canceling feature will reduce the volume of these noises. This will allow your voice to be transmitted clear and louder than the background noises.

You will find that there are many different design styles of headsets that contain a microphone.

Some headsets are wired with earpieces to go inside your ear while the microphone is further down the wire – this is typical of mobile phone microphoned headsets. This way, you don't have to hold the phone up to your ear to speak and listen.

The issue with this headset is that it might impact the sound quality quite a bit, as the microphone will be hanging down from your ear. If you don't hold the wire to place the mic near your mouth, the sound quality might be poor. This is because the microphone might be rubbing against your clothing, especially if you're walking while using them. This will cause sound problems, and your voice won't come out clear and loud to the recipient.

These headsets can either be wired or non-wired. If the non-wired type, it will be using Bluetooth technology to transmit the sounds, both in your ear and through the microphone.

The other type of headset that can have a built-in microphone is a True Wireless Earbud. As you can imagine, these Earbuds are small, but the microphone inside is even smaller! So the sound quality might not be as good. Plus, there is a big open space from your mouth to your ear – so environmental noises can also affect the sound.

As mentioned above, these headsets have a microphone on the wire that connects into your phone's headphone socket. The microphone's position and location are not the only reasons the sound quality can be poor.

The coverage provided by your network is the biggest reason for issues with sound quality. Your microphone may be perfectly fine and able to transmit a good sound, but if the signal on your mobile phone is weak, low, or up and down, this will cause the sound issue.

There are loads of different network providers, and some have better coverage than others. You could be in your yard one minute and have a brilliant signal on your phone, but as you walk into your house, it can be affected – depending on the provider.

If this happens to you frequently, it may be worth using a network coverage checker for your area to see which provider has the best signal then change to that provider instead. This will make your phone calls from your mobile phone much better.

Bluetooth can be fantastic – it has given us the freedom to enjoy many things hands-free. It allows your devices to communicate with each other and send data back and forth, just how it does with sound from a Bluetooth headset.

There are a few issues with Bluetooth that can affect the delivery of sound to the connected device.

The reason Bluetooth can cause issues with sound is due to the way it works. It has a codec system; this picks up on your voice and then packages this data so it can send the package to the connected device.

The connected device then receives the package via the Bluetooth and unpackages it to reveal the data. This is where the problem is – if the connected device doesn't recognize the package or is unable to translate it, this will cause the data to be lost and will interrupt the transfer of the sound of your voice to the person on the other end.

If you're talking for some time, then the Bluetooth headset needs to handle a lot more data to send to the connected device.

Some Bluetooth codecs can handle audio sounds better than others. The codec inside your headset should be able to cope with audio to transmit audio data to another device it's connected to. Manufacturers should consider this when designing their products, so this shouldn't be an issue for most headsets. It just means that if other issues are affecting the sound (such as network coverage and environmental sounds), this can make things worse. Although, this won't affect the sound quality alone.

Bluetooth has been developed over the years, releasing around 10 different upgraded versions. The latest Bluetooth is the Bluetooth 5.2 version, which was released in 2019.

Another feature of Bluetooth is that it transmits data between devices but only those with a short distance between each other. You can't be too far away from the device you're trying to connect with and send data to. The Bluetooth range can be different for each device. You can get Bluetooth headphones that you can use in your home, and you should be able to pick up the frequency throughout it – although not always.

The further you are, the weaker the signal can get – just the same as wi-fi can. You'll find some areas that are not great at receiving a solid connection.

Radio waves are what make the Bluetooth technology work - these are called UHF radio waves. The wavelengths are short, and they range between 2.402 GHz to 2.480 GHz.

It has happened to us all – if you have ever had a conversation using a headset while out in the street, you will understand the struggles of external noise. A loud bus or someone shouting as you pass them in the street can interfere with the sound quality.

This is because external factors can easily be picked up when we use headsets. The great news is that you can buy noise-canceling headsets to block out external noise. They might pick up some noises, but they will try their best to keep them to a minimum, so your voice is loud and crisp.

The Size of Your Microphone

There is a wide range of different microphones available for people to purchase and use. The microphones found in music recording studios and at a concert are usually big and bulky. These are built with components that enable them to work to the best of their ability. With microphones like this, there is no specific size limit.

The casing around the microphone can be any size to accommodate the inside components that transmit the sound.

You may have seen stand-alone microphones that people have wired to their laptops or computers. Again, these come in a range of shapes and sizes.

Headsets are only small compared to these larger microphones. They have smaller microphones built into them, which are known as MEMS microphones. MEMS stands for micro-electro-mechanical systems. They're small to fit into a range of devices like headsets, earbuds, mobile phones, and any device that requires a small microphone.

As they are smaller, they don't transmit as much data as large microphones do. This is why they don't always pick up on certain sounds. That said, MEMS has been developed to be good at receiving sound.

If you're having trouble with your microphone, it could just be a connection issue, or it could be a combination of issues. The best thing to do is check you have a good signal before making a call. If you're using a Bluetooth headset, try to be close to the connected device. If your headphones have a bit of wear and tear or you've had them a while, they may need to be replaced. Do this, and you can enjoy uninterrupted conversations once again.