Over the last decade, the music industry has become more top-heavy than ever, with a short list of mega-stars dominating the international concert tour business.

You may have already guessed; big name acts such as Beyonce and Taylor Swift are absorbing up the majority of revenue for concert and tours. While it’s true that there have always been “bigger” or more popular artists, this current domination over sales has never been seen before. 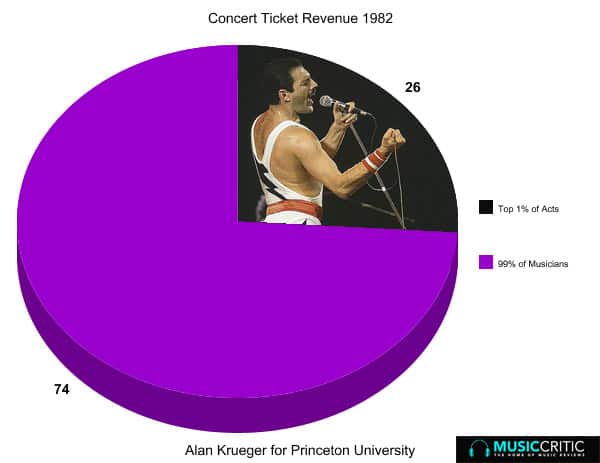 According to an analysis performed by Alan Krueger, a Princeton University economist, 60% of all concert ticket revenue, around the world, went to just 1% of the top performers in 2017. If you look at this in comparison to the 1982 statistics - where 26% of the top acts dominated ticket sales, it’s quite the difference.

Krueger’s book, “Rockonomics,” which highlights the economic shift in the music industry, states that just 5% of the artists took home the entire revenue. He states; the middle has dropped out of music, as more consumers gravitate to a smaller number of superstars. It’s an intriguing shift in economics that highlights the difference in how we listen to and interact with music. 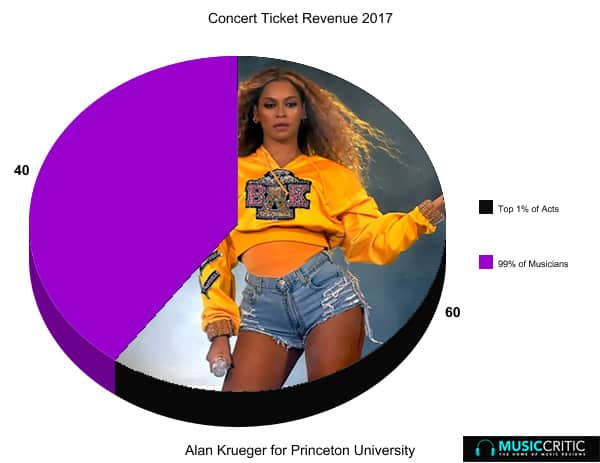 The most significant shift in the music industry in the past decade is, of course, streaming. Superstars have always dominated the sales of recorded music, but streaming has made it much less profitable. While consumers may have access to more music, performers, regardless of if they are big or small, generally don’t make as much money.

In the past, records, CDs, or download sales made earning money from recorded music much more accessible. Now, artists rely on concert revenue for the vast majority of their income. It’s only the superstars that can charge significantly more for ticket prices - arguably, if smaller artists used the same prices, they would not make any profit.

The results is the not-so-big performers compete for an ever-shrinking share of the concert revenue.

To put this in perspective, the average ticket price in the U.S. increased from $12 in 1981 to $69 in 2017. This drastic increase was driven by superstars and hasn’t correlated well with inflation prices on the whole.

For example, Taylor Swift charged a shocking $119 per ticket, while Beyonce and Jay-Z charged a hefty $117. By contrast, Ed Sheeran’s $89 a ticket appeared relatively modest. Evidently, all these prices are unquestionably high, especially if you consider just ten years earlier, they would have been considerably lower.

At the bottom of in the industry, the lowest 2,500 acts (rated on revenue), grossed about $2,500 in 2017 from concert tickets. Of the 10,808 touring acts that Krueger studied for his report, the vast majority of revenue went to the 109 acts that make up the top 1%. It’s when you put it into perspective like this that you realize just how one-sided the music industry has become.

Of course, there is also artists and performers in the “middle” ground. These types of performers are looking for innovative ways to supplement their income. For instance, they will often play at private parties or agree to more niche gigs.

That being said, the bigger names will always have the most leverage. Today performers are generally generating about three-fourths of their income from concert tours, which is drastically different to the 30% in the 1990s.

While many artists are struggling to deal with the smaller revenues from recorded music, it’s still the most prominent stars that have the most leverage and, thus, revenue.

It’s not that more significant performers are selling more either - the share of concert tickets that are sold has stayed relatively consistent. However, the actual ticket prices have risen at a dramatic pace, especially compared to smaller artist’s prices. Ultimately, this means that while it’s true that concerts generated a record $10.4 billion last year in revenue, that cannot be credited to the fact that more concert tickets were sold.

It’s not all doom and gloom for the smaller acts. Social media and streaming services have helped smaller acts in regards to marketing. It’s becoming much more accessible for emerging artists to be discovered, and interact with fans. While album sales may be plummeting, smaller artists have the opportunity and platforms to reach more fans and promote their music.

Arguably, it’s the performers in the middle market that take the biggest hit. As genres like rock aren’t as prevalent on streaming sites as hip-hop, an increased need to tour, and reduced earnings from recordings can be hard to soldier through.