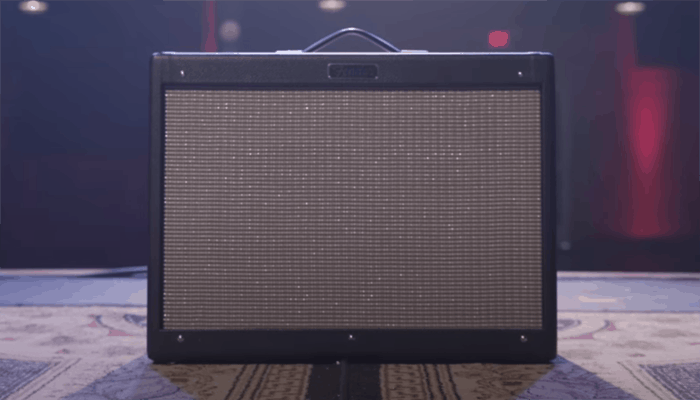 Having played around the world on stages for small crowds to festival gigs, we know it can be daunting to show up a gig and not know what the backline situation will be like. Luckily, one amp shows up more than all of the others: the Fender Hot Rod Deluxe.

When you walk into the club, and you see one on the stage, you breathe a sigh of relief knowing that you're going to have a great tone that night. That is more true than now than ever because Fender has updated its not classic Hot Rod circuitry to reflect the wants and desires of Fender-heads all of the world with the Fender Hot Rod Deluxe IV.

About the Hot Rod Delux IV

This three-channel, 1x 12" 40w tube amp has a robust feature set associated with contemporary tube amp technology and is made for someone who wants an all-around amp for rehearsals and gigs. Its master volume circuit makes it easy to dial in the tones you love at any volume.

The preamp section is comprised of 3 12AX7 tubes, delivering a redesigned smoother and warmer overdrive that compliments the chimney cleans you know and love. The 6L6 power tubes provide the perfect amount of power for medium-sized clubs and large stages with enough headroom to give you clean tones that can compete with aggressive drummers.

Push this power amp, and you'll be treated with the creamy power tube overdrive you hear in your dreams. It comes with an all-new pine cabinet and redesigned reverb that maintains the note definition you love but can be pushed to drippy extremes. There are a fantastic amount of tones you can get out of new Fender Hot Rod Deluxe IV.

Getting a great tone starts with great materials. You can put the finest tube amp design into a poorly made cabinet, and you'll hear all of that tone get squashed and choked by inferior craftsmanship. That's why the Fender Hot Rod Deluxe is now made out of a pine cabinet. It's light in weight, and that resonates openly, making your amplifier perform at its very best.

The new preamp design keeps the sparkling cleans you know and love from Fender amps. But it has modified its drive and more drive channels to have a warmer and smother crunch that tames some of the more aggressive sounds of the previous models.

Previous models of the Hot Rod Deluxe featured a mirrored faceplate for the amplifier controls, reminiscent of the original Fender Tweed models. While these were aesthetically pleasing, their functionality was deeply reduced on stages with high-powered lighting systems because of the reflection of the light. With a brand new matte finish, this glare problem is now a thing of the past, and you can access and see your settings easily on stage so you can play your best.

The new spring reverb of the Hot Rod Deluxe IV makes it providing your records and live shows with some serious vibe and mojo even easier. Its tone has been made a little less bright with more of the range of reverb made useable. Even at the highest settings, you'll still get great clarity as you approach peak surf.

The new speaker in the Hot Rod Deluxe IV is a large departure from the Eminence Legend and Celestion G12P that used to be in the Hot Rod Deluxe. Voiced with an almost British tone, this speaker will give you a lot more crunchy jangle than you are used to from a Fender amp.

- 40w is a lot of amp. For those only playing small clubs, this may not suit your needs

- Even with its reduced weight, this amp might be a little too heavy for someone unconvinced by the superiority of tube amp designs.

With its updated features, the Hot Rod Deluxe IV is quite an upgrade from previous models. It's a versatile powerhouse that always feels familiar.