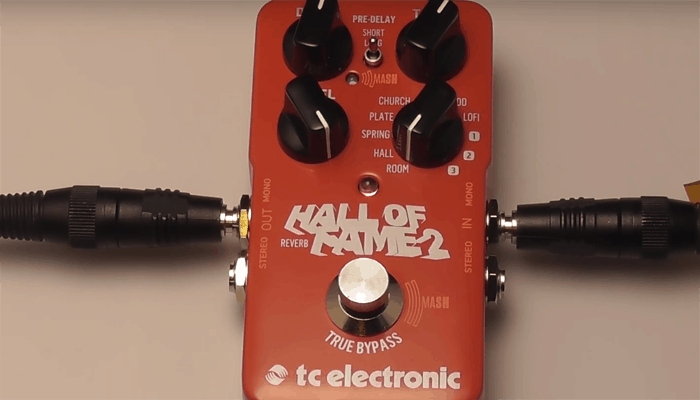 After the raging success of the previous flagship edition, the shiny red reverb pedal is back, packing a real punch. 'TC Electronics' has expanded the Toneprint slot from 1 to 3, a noticeable upgrade direction given that the Toneprint feature is what clinched the deal for most guitarists in the first place.

In addition to the extra 'create your own' slots, there is a new shimmer reverb that rivals some of the other competitive pedals, and most importantly, it has been fitted with their new MASH pedal switch. We will dish the dirt a little further on the clever capabilities of this tough but tiny switch in a short while, but first, let's examine the build and layout.

The Hall of Fame 2 has a hardy stomp-proof enclosure and compact dimensions so it can complement a pedal chain set-up. It has two quality quarter-inch inputs, which can be used in a mono or stereo fashion and two outs.

The top has four durable dials with a simple layout. They are well-spaced (so you won't find them too fiddly on the night) and are visually labeled; the first is for decay, the second dials in the tone. You have a Level control, and importantly, your reverb selection dial.

There are different reverb settings to choose from, including your typical plate and spring reverb. They have identical algorithms to the original model, and for some, the spring reverb isn't as impressive as other spring reverb pedals on the market. But we love the spatial settings on the room reverb. You get room, hall, and church, and once you open up the software, you can change the scope of all the presets.

The newest polyphonic octave algorithm (named 'shimmer') is a combination of some of TC Electronics' other pedals. It utilizes parameters from their popular Sub'N' Up Octaver pedal circuitry, which provides a beautiful effect.

There is a Mod setting and a Lo-fi setting, totaling seven prests, plus three Toneprint spaces for ten overall reverb sets. Y with the decay, level, and tone dial, which is essentially an EQ based dial, allowing you to draw the filter attention to the low, mid, or high end.

Nestled between the decay and tone dials, is a tiny flip-switch to toggle the effect length from short to long and vice versa. This also has a dramatic effect on the dialed-in tones and settings.

In addition to the on-board adjustments of the hardware, you have a complimentary software that allows you to take the preset reverb and tweak them until they are virtually unrecognizable. You can then imprint your newly molded effect into one of the three Toneprint slots for easy retrieval, and again play with the levels and decay on-board.

The Hall Of Fame 2's most significant feature is its previously mentioned MASH foot-switch, which essentially turns what looks like a traditional stomp-box trigger into a miniature expression pedal. It reacts to pressure and so can be used like a wah or whammy pedal to control the effect parameters.

You can also tailor the MASH control within the software for your Toneprint slots. This is a bit of a game-changer. You can use the editor to assign the pressure control to adjust the decay tone or volume and even stack all three should you wish. The effect will then intensify as you apply more pressure with your foot.

The Hall of Fame 2 is an impressive upgraded model that still features all the previous algorithms on-board from the original pedal. It has been updated to include a gorgeous new shimmer setting, which was made from shaping the algorithms on TC's Sub'N' Up Octaver pedal. It has ten total reverb settings with delay, tone, and level dials on-board as well as a short/long flip-switch.

There is no doubt that the Toneprint software was a sweet selling point for the first pedal, as well as the new edition feature: two extra slots for storing your creativity, for easy retrieval.

The switch has been replaced with a pressure-sensitive MASH switch that lets you use the pedal in a live setting in the same manner you would with an expression pedal. This allows you to control the intensity of your decay and levels from afar with foot operation and broadens the dynamics of your playing style.

- The Spring reverb is probably not the best out there.

While there are a lot of fans of more complex reverb pedals, we think the Hall of Fame has the balance right. The on-board settings present a wide enough variety of typical reverb settings, the tone dial helps color them in a distinguishable way, and the decay and the lengthening switch also help change it up dramatically.

Opting to keep the more extreme tone and effects sculpting within a software addition helps keep the pedal simple, clutter-free, and easy to use in a live situation. We love the MASH switch addition and think it has oodles of potential.

The Best Wah Pedals to Buy in 2022 Review