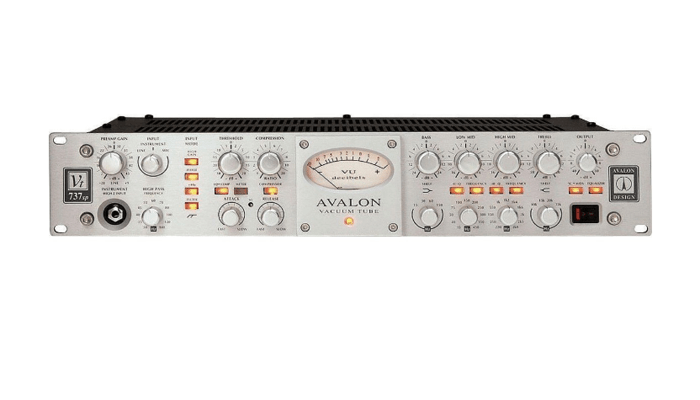 If you are seeking a superb single channel strip for perfected pre-amp signal sending, then the Avalon Vt 737Sp is a surefire way to go. The flagship 737 was one of the first-ever channel strip boxes ever designed and manufactured. When it came to the market in the early nineties, it changed many sound engineers' worlds.

Of course, many channel strips were to follow the Avalon, and with developments, some modern models offer new technological incorporation. Despite newer boxes providing impedance controls and more flexibility for adjustments, many high-end studios still use the original Avalon 737.

To compete with the modern models that were beginning to up the ante, Avalon has revamped and upgraded their nifty 90's pre to provide more than ever before. Notably, the attack has been increased to give it a punchier sound.

With solid casing and high-quality components, the Avalon has toned down the aesthetics and looks a little more tasteful now that it has gotten rid of its gaudy purple knobs. In their place are hardy aluminum dials that feel very durable in use.

It has a well-organized layout. Avalon has packed a lot into this U2 sized box of tricks, but the wealth of knobs have been divided into three main stages, making the operation a little less confusing.

The first stage is for your input selection. There is a high-performance tube microphone pre-amp with optional 48-volt phantom powering, an instrument DI, and a balanced line input. The instrument DI has a high-gain selection button, meaning it can cope with the hottest pickups.

All have discrete high-quality Class-A circuitry. The 373 SP operates with four high-quality vacuum triode tubes, giving optimal sound by eliminating negative feedback. Each of the inputs also has phase reverse relays. They are all sent to a balanced gain-matched XLR out.

You can adjust the pre-amp gain and engage the filtering. The high-pass filter is passive and variable; it ranges from 30 to 140 Hz.

The onboard Opto-compressor helps to control peaks and gives very even signaling. It gain-matches by utilizing dual Class A vacuum tube triodes and runs with simplified signal pathways that keep things crisp.

It isn't well-equipped when it comes to fast er transients, but you don't necessarily want much compression on the tracking end anyway. You can use the attenuator as a passive level control with very minimal compression. It doesn't affect the tone of the vocals.

Taking pride of place smack bang in the middle is Avalon's VU meter, to give you a visual volume and noise indication.

The final section is your 4-band EQ with a separated lo-mid and hi-mid with a switched Q-width selection. There are four frequency dedicated dials for you to sweep adjust, and there are switchable x10 frequency multipliers.

It has a bypass circuit with a sealed silver relay, keeping it direct and letting you sculpt a pristine sound. If you change it to side-chain, then it can be used as an enhancement. This adds a huge buttery warmth, and the highs are sparkling.

The Avalon brand is renowned with the majority of sound engineers, giving the original 737 pre channel strip rave reviews. The SP model is a modern reincarnation of a Class-A tube mic pre-amp strip that will enhance your microphone signals with a glistening warmth.

It's decidedly well-engineered and features nothing but the best under the hood with some very high-end tube transistors. The chassis is very durable, the dials all feel great, and the VU meter is very accurate. It works as a flawless DI box and is perfect for recording instruments and vocals into your DAW.

It has a user-friendly layout with three main stages on a universally sized rack-mountable unit. You have a great mic pre-amp, a high-gain instrument input, and a balanced line-in to choose from. There are great onboard compressors and 4-band EQ with sweepable frequencies.

- There are other options available with more in the EQ department, so if you don't like to spend hours in your DAW editing a track, it might not be the best channel strip you can get your hands on.

The VT 737 SP (Special Performance) is a modern upgraded version of the channel strip that started it all. With redefined looks, heaps of attack, and top-notch sophisticated circuitry in a U2 rack space, it is a superb studio addition that is easily integrated.

It has high-end inputs and a great compressor, as well as variable and passive high-pass filtering. You can give a mic a new lease of life, capture a hi-Z guitar, and keep your levels pristine for the perfect capture.

10 Best MacBooks for Music Production in 2020