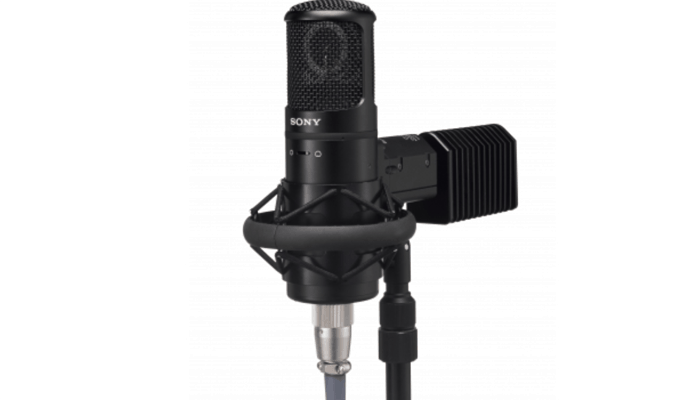 Described as one of the most elite microphones on the market right now, the Sony C-800G is a splurge, with a pricing range above what most of us can afford. However, the splurge in price is completely worth it.

The Sony C800G is one of the most rated microphones and produces a professional recording sound like none other. Currently, the Sony C-800G is being utilized in the studio by huge rap producers and artists such as Dr. Dre, Eminem, Kanye West, Snoop Dogg, and the highly acclaimed singer, Mariah Carey.

The high sensitivity (-33 dB/Pa) of the Sony C-800G makes this microphone a godsend for recording vocals with clear cut detail and perfection, while also being an excellent choice for acoustic instrumental recordings. It boasts an absence of a noise floor, producing recordings with minimal to no distortion and complete clarity.

Another aspect of the construction of the C-800G, which assists with the perfect capture of sounds, is the two-part aluminum body. This feature prevents acoustic vibrations or resonances when recording. Thus, an enhanced, crisp sound! If you take a look at a picture of the C-800G, you may be wondering what the tube-like device is attached to the main body of the microphone.

The C-800g includes a vacuum tube to facilitate in regulating the temperature of the device after periods of long usage. This cooling system maintains an optimal operating temperature, which is vital in ensuring the longevity of performance without distortion or interrupted sound quality.

The microphone includes a dual-diaphragm system, which enables the user to select between cardioid and omnidirectional polar patterns. The two separate diaphragms in the microphone vibrate when placed parallel to each other, meaning you can execute multiple pick patterns at once.

+ If you're looking for pristine, high fidelity vocals at professional production quality, then look no further. The Sony C-800G, used by professional superstar musicians and rap stars, will not disappoint in this respect.

+ It delivers one of the clearest sounds concerning vocals. The various design features of the C-800g, namely the dual-diaphragm, the two-part aluminum body, and the vacuum tube, ensure that all sounds captured are as clear as they are in real-time.

- Something that may deter people from purchasing this microphone is the fact that it's not as recognized as other high-end brands such as Neumann, Telefunken, or AKG. However, as previously mentioned, this microphone is becoming a staple for huge artists in the studio. Watch this space - we expect this microphone to blow up and become one of the most known on the market soon.

- Although the high quality and pristine capture of sounds that this microphone possesses is a significant advantage, it can also be a disadvantage to some. If the recorded singer lacks in precise vocal output, this microphone will capture every mistake and off-note made.

- The most obvious con of the Sony C-800G microphone is the price. Shelling out thousands of dollars for a microphone is not something we all can do. The pricing range does push the C800G into the 'elite' group of microphones. With a costly upfront price, then comes the expensive maintenance costs after that.

- This microphone is truly an investment, and the purchase is not a decision to be made lightly. However, the price is worth it! Not only will this microphone deliver all your production needs and wants, but it will last a lifetime! There's no more replacing microphones regularly after burnout from long periods of usage!

- Another thing to think about before purchasing the Sony C-800G is the style of music that you are working with. Although hailed as the holy grail for recording vocals and acoustic instrumentals, the Sony C-800G may not be the best choice for other genres, like heavy rock, for example.

The ability to produce a high level, professional production output in the comfort of your own home is not something to be taken for granted! The Sony C-800G allows you to do just that. With a combination of the exterior structural design, the dual-diaphragm, and the vacuum tube, you can expect no less than clear, pristine output with this microphone.

The sound quality when using this microphone, particularly when recording vocals, is truly incredible. It's one that many microphones on the market cannot compete with. Who wouldn't want their recordings to be of the same caliber as Mariah Carey's or Kanye West's?