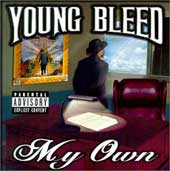 Young Bleed Comes Into His Own
by: briana houlihan

Young Bleed's My Own, an LP from Priority Records with music by Steven Below, begins with a dramatic musical composition. The first track, "Bless 'Em All" combines heavy preaching style lyrics with strong background music that sounds like it belongs in a doomsday film about the end of the world. The first song sets the tone for the whole album, which seems to be that it's time for the people who are not living right to change their lifestyle and improve their situation.

"I Couldn't C It" is a fitting second track because it talks about how many people are ignorant to the dangers of their situation, and oblivious to the need for change. Being unaware of the fate that awaits you is one powerful theme on this album. The other main theme is that living in the hood makes it nearly impossible to remain hopeful about the future. However, the message seems to be that no matter how desperate the situation seems people who live in the inner city cannot give up on their neighborhoods or nothing will ever get better.

The legendary Too Short makes his appearance on "Time And Money,"a song that adds repeating piano bars to hip hop's traditional thumping bass music. This cut has a very synthetic sound, and will remind listeners of all those West Coast weed-smokin' hits. Too Short lends his gangster whine to this cut, which talks about what real players do to get ahead in the ghetto. This track also talks a lot about drug use and treating women like sex objects, playing to the theme that it's hard to give up these practices when they are all you see around you.

"All They Lef' Me Wuz Da Streets" serves up a very powerful slice of life from U.S. city streets. This cut speaks about drugs and violence remaining big problems in inner city neighborhood and beyond as long as there are new generations coming up who are taught nothing but the ethics of thug life. This track offers insightful commentary on the sorry state of our inner city neighborhoods. Also, the end of the song incorporates more foreboding, fatalistic instrumentation, which is fitting for a song with such weighty messages.

"A Husla" has more of a sixties feel. This song fittingly sounds like background music from the many "blaxploitation" movies of the 60s and 70s. The music has a very cinematic feel, calling to mind the image of the tough, street wise black man shuffling down an alley with a gun, just trying to make it any way he can in an unfriendly and unjust world.

The unique thing about this album is that all the songs talk about not just surviving in the ghetto, but coming out on top. The messages are more credible coming from drummer turned rapper Young Bleed, because he grew up in "Bloody Sticks," an extremely violent south side neighborhood in Baton Rouge, LA.

Being true to yourself is one way Young Bleed says you can make it out of bad situations. He has remained true to himself and his music, fighting industry pressure come off as more of a gangster than an artist.

Bleed says, "Me, I'm not really trying to be a gangsta, but more or less be a street poet."

He has achieved this on his new album. While many gangster elements are present on My Own, Young Bleed stays true to his unique poetic flow and presents hood life in a less boastful, more informational style.

This album is a more pure presentation of street life from an artist who won't fit anyone's stereotype.