Home » Other » Bigger, Longer, and Uncut 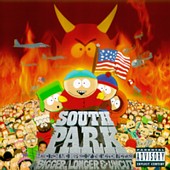 What the world needs now, is love, sweet love. Or maybe all we really need is to get rid of Canada. At least that seems to be the theme of South Park : Bigger, Longer, and Uncut.

This is a musical, but it is no way about love. Instead it is full of vulgarity, bodily functions, heaven and hell, and random acts of unpredictable violence. In other words, it kicks ass.

First off, I need to make a confession... although I do call myself a South Park fan, I never got a chance to see the movie while it was in the theaters. However, after hearing this soundtrack, I have already put down my money to reserve a DVD when the movie is released for home viewing. A soundtrack has never done that for me before.

Quite simply, this is a brilliant album. Parker and Stone (creators of South Park) have showed off just how much talent they really do possess. The album works exactly as a musical full of showtunes would. There is the opening song which sets the mood for the show, in this case "Mountain Town." Throughout the album, the story of the show is portrayed through song. There is even an entre'act entitled "A Resistance Medley." Musically it sounds just like a broadway show - I can't wait to see the choreography now.

But why a musical? Let's face, it the majority of South Park fans are probably not the theater going crowd... However, this album overcomes those barriers. There is not a hint of seriousness to the songs, and in the one point where it may seem like something is coming through - we are given a heartfelt song - sung by none other than Satan. How is that for irony?

However, like pretty much every other soundtrack, this one has its high points as well as its low points. Some of the funniest tracks include "I'm Super" (Big Gay Al), "mmmKay" (Mr. Mackey), and my personal favorite "Uncle Fucka" (Terrance and Philip - who else could do a fart solo?). The album could have easily done without the Kid Rock version of "Kyle's Mom is a Bitch" but at least the extended version by Eric Cartman makes up for it.