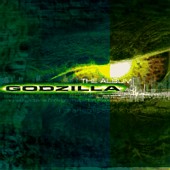 Don't Judge a Soundtrack By It's Movie
by: bill aicher

So what if the Godzilla movie didn't live up to the standards many set for it?  The movie has little, if anything to do with a soundtrack.  So, although the movie was not quite the blockbuster the world expected, this album certainly could surpass any expectations.   With its selection of the biggest names from virtually every musical genre, the Godzilla Soundtrack could very well be this year's hottest soundtrack.

This album has just about everything I could hope for in a soundtrack.  The best part about it is that it does not suffer from the fate of most soundtracks - inevitable suckage.  Throughout the album's 15 tracks, there are only a few which I do not care heavily for.  The album starts out with the latest release from The Wallflowers, a cover of David Bowie's "Heroes".  Personally, I like Bowie's version better, but this song seems to have hit well with the kids and the rest of the alternapop audience.  Maybe I am just sick of Jakob Dylan's voice since it is heard way too often these days when I have my radio on...

The next track is quite possibly the shining gem of the album.  This pearl within the oyster is "Come with Me" by Puff Daddy featuring Jimmy Page.  If you have yet to hear this track from today's hottest rap artist, here is a little info on it.  Sean "Puffy" Combs (Puff Daddy) is famous for his use of samples in his songs.   This track is no different, in fact the song he samples is Led Zeppelin's "Kashmir".  Therefore we have Jimmy Page on guitar.  Another welcome addition to the track is Tom Morello of Rage Against the Machine who offers up a kickin' bassline to make this one mean rap/rock song.

The rest of the CD is nothing to complain about either.  The UK's Jamiroquai offers up the next track.  Talk about a killer bassline, here is one of the coolest I have heard in a long time.  Jay Kay's rap/rock/alternative singing style sets the mood well.  Rage Against the Machine (one of my personal favorites) include their latest studio release, "No Shelter".  The theme behind the song is no different than their other songs, basically bring down the government.  (Rage is basically a Communist band, but hey, they sound cool).  One of the coolest lines in the song, which does a good job of bringing across their point is "Use Godzilla as a motherfucking filler, take your eyes off the real killer".  Too bad the expletive causes the line to lose its radio friendliness.  Once this song is over, we have quite the strange transition, from Rage to Ben Folds Five.  This is quite the musical contrast of styles, but it actually sounds cool with the way it hits you.  Once again, this is the latest studio release from Ben Folds and lives up to the standard they have set for themselves.   (This song is the original reason I purchased the album, and being a big Ben Folds fan, this song alone made the CD worthwhile).

The CD continues by venturing into a rock centered style, with artists such as Days of the New, Fuel, Foo Fighters, Green Day, and Silverchair.  There is one break from the rock with Michael Penn's alternative/country "Macy Day Parade".  Each of these tracks offers what we have come to respect from each respective band, and none of them disappoints.   Even though Green Day simply re-released "Brain Stew" on this album, the little Godzilla mix they did makes it funny with the mixing of the Godzilla roar within the power chords.

Before finishing up with a few tracks from the score, Joey DeLuxe does a spy song entitled "Undercover".  It is probably one of my least favorite songs on the CD, but if you are a fan of song reminiscent of "Secret Agent Man" you might like it.   The last two tracks are selections from the score, including the opening titles, both composed by David Arnold.  Arnold's work here shows that he has potential to become one of the bigger composers for future movies.

So, maybe the movie didn't prove that "Size Does Matter".  The album sure does.  With the huge names on the CD, and the quality work they put forth, Epic/Sony put out a great soundtrack for a movie that originally had no plans for a soundtrack other than a score.   The only reason these songs were added is because the artists actually approached the movie company with their songs, and asked to have them included on the soundtrack.   Pretty cool eh?  Well at least the movie brought about something good.