Home » Other » The South Park Album 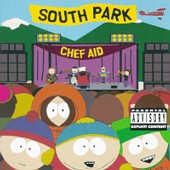 The Best Cartoon Soundtrack of the Millenium
by: bill aicher

And now the moment you have all been waiting for : the latest from Comedy Central's own South Park. Through this album, we are reminded that South Park is here to stay - and that it is pure genius.

This album totally blew me away. When I heard that South Park was going to have a soundtrack, I was kind of excited (I mean I used to help run South Park Central so I am a big fan of the show). However, lately I have not been paying too much attention to the show, and I assumed this album would be a vain attempt to make a quick buck. I was wrong - the album is definitely not a waste.

Since the album is Chef Aid, it can only be assumed that we would get the best of the best out in support of our favorite member of school food service personnel. We have tracks by such famous acts as Master P, 'Ol Dirty Bastard, Crystal Method, Perry Farrell, Devo, Elton John, and many more.

In addition to the work done by these big names, Isaac Hayes joins up as the voice of Chef. He does backing vocals in a few songs, as well as doing a few solo songs as well. "Chocolate Salty Balls (P.S. I Love You)," is one of the first singles off the album - an excellent mix of sexual innuendos when talking about Chef's most famous dish. "Simultaneous" is an ode to sex with multiple partners - at the same time. The infamous "No Substitute" from the Valentine's episode is redone in full by chef - now a love song to Kathy Lee coupled with a graphic description of a sexual encounter between two hummingbirds. His final track is a duet with Meat Loaf in the song "Tonight is Right for Love (With Meredith Baxter Birney)." All of these tracks are sure to get a laugh out of most people.

Chef's tracks are not the only highlight to the album though. The big names all shine through as well. "Nowhere to Run (Vapor Trail)" is a group collaboration between The Crystal Method, Ozzy Osbourne, DMX, 'Ol Dirty Bastard, and Fuzzbubble. The sound is one of the more unique ones found on the album, incorporating a mix between electronica, rap, and rock - all by the biggest names in their respective industries. Master P offers up a little rap track called "Kenny's Dead" and Rancid do their own original track "Brad Logan."

By far the most noteworthy track is Eric Cartman singing his own rendition of "Come Sail Away" (Styx). Anyone who knows this song is sure to get a kick out of this song, sung in its entirity by the the little fat kid. The rest of the tracks are all quality as well. The only ones I don't care much for are Devo's "Huboon Stomp" and Primus's "Mephisto and Kevin" (although "Mephisto and Kevin" is interesting because it explains just who that little monkey boy is).

I definitely recommend this album - even if you are not a fan of South Park. Pretty much everyone is bound to find entertainment inside. It is available in both and explicit and edited version, so you can even get one for the kids. My only problem is that it has a definite chance of losing its meaning as South Park begins to fade. That doesn't seem like an immediate threat, but it is bound to happen. Enjoy this while it lasts.