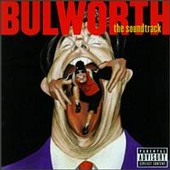 The first thing that catches my eye about this soundtrack is the number of artists that are featured on it, and the variety.  This soundtrack features many talented veterans, and introduces some talented new ones.  It has about the average number of songs for a soundtrack, 14, and has already spawned two hits, Zoom by Dr. Dre and LL, and Ghetto Supastar by Pras, Ol' Dirty, and Mya.  It made it to No. 10 on the Billboard 200®, and is still at No. 23.

The third track by Canibus and Youssou N'Dour, "How Come," questions some things in life, like street violence and government corruption.  Wyclef Jean asks questions during the refrain.  The song has a light acoustic guitar in the background, with a light 1 and 3 beat over it. It fits the pondering that is brought on by the lyrics.  The title track, Bulworth, features some major aritsts, Method Man, KRS-One, Prodigy, and Kam.  In it, each artist talks about certain aspects of life where hypocritical whites are in control, such as the government or as editors for black magazines.  Musically the song is very good.  However, the next track is not.  The music is the Atlanta style, seeing as that's where Witchdoctor is from.  But Witchdoctor just doesn't have the flow groups like Outkast and Goodie Mob have, so it basically wrecks the track.  The refrain just plain sucks....

Then the soundtrack gets a lift, and who else to do it but, my man, The RZA.  His song, The Chase, is about getting chased by the Po Po.  It very good, song, as he combines his intelligent lyrics and Wu-style samples and beats.  The refrain is funny, and it amazes me how he came up so many "running" actions that go together.  It goes "burst, break, run, jet, flee, boogie, move, we outtie.  Slide, duck, dip, bounce, be ghost, escape, blazini, poof, the genie, disappear, cast out like they ain't seen me, Killa Bee fast Lamborghini."  RZA does it again....

From here on out the album is ok.   It isn't bad, but it isn't astounding either.  "Maniac in the Braniac" shows Ice Cubes West Coast style.  It's a good song if you are a fan of West Coast.  The next track, "Freak Out," by Nutta Butta, is the weakest track on the soundtrack.  Musically it is really boring, it has nothing to it.

The next four songs are aight.   A talented new group, Black Eyed Peas, lay down a smooth, energetic dance jam, "Joints & Jams."   "Run," off of Cappadonna's "The Pillage" album, is featured next.  Then another solo song from B REAL of Cypress Hill.  "Lunatics In The Grass" has the familiar Hill sound.  Public Enemy shows they still have an edge with "Kill Em Live," which as is characteristic of Public Enemy, uses real percussion.  Chuck D can still get pissed.   The soundtrack features two songs by females, Eve and D-Fyne.  They are ok.

Overall the soundtrack is pretty good.  Most of the really good songs are on the first half of the cd, making the second half somewhat boring to listen to.  But it still musters up 3 turntables out of 5.