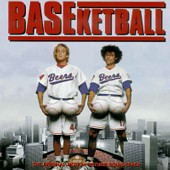 Before There Was South Park, There Was Baseketball!
by: bill aicher

Yes, I said BEFORE South Park.  Baseketball, starring them wacky creators of South Park - Trey Parker and Matt Stone, was actually filmed before South Park was ever shown on Comedy Central.   The movie release was delayed a bit due to problems with other release dates.   However, we are a MUSIC site, so enough about the movie, on the the soundtrack.

This soundtrack is of about the same quality as most other soundtracks.  While there are a few great tracks on here, there are a few bad tracks as well.  This is very common with soundtracks, with their attempt to encompass a variety of styles and artists.   BASEketball suffers from this same soundtrack syndrome.

The album starts out with what I consider one of the best songs on the album.  Despite the fact that any hard-core ska fan will tell you Reel Big Fish is nothing but a bunch of sellouts, it has nothing to do with the quality of their music.  On this first track, Reel Big Fish (one of today's hottest ska bands) covers the 80's A-Ha hit "Take On Me".   (You may remember the original video as the one done with all black and white line drawings and sketches).  I love the original version of this song, and I thought redoing it would be next to heresy.  I can be wrong sometimes though.  RBF does a pretty good job covering it, and their horn chords do a great job in taking the place of the synthesizers used in the original.

The album continues with a "Don't Hate Me (Because I'm Beautiful)" by Nerf Herder.  This song is an interesting mix of different genres, with a ska sound over what sounds almost like Phantom of the Opera.  Deep Blue Something contributes the next track.  This is the first I heard of them since their hit "Breakfast at Tiffany's" a few years back.  The album continues with a few mediocre offerings by Supersuckers, Plastiscene, and Soul Asylum.  The Soul Asylum track is "I Will Still Be Laughing" and is their first radio single in a few years.

Next we get to another of my favorite tracks.  Cherry Poppin' Daddies offers up some calypso with "Jump in the Line (Shake Shake Senora)" - a previously unreleased cover of the Harry Belafonte song.   Fans of the movie Beetlejuice will recognize this song immediately, and the cover is VERY close to the original.  Even though I am personally getting sick of Cherry Poppin' Daddies, I can't deny that they are pretty damn good.

The rest of the album is nothing too exciting.  The Ernies have a pretty cool track, I might actually look for a CD of theirs after hearing this track.  It encompasses a reggae singing style over a deep bassline and drum beat.  "Motivate" by The Ernies has some cool vinyl scratching, with a laid back ska feel - leading to a style similar to that of Sublime.   Reel Big Fish offer up another track, this time it is "Beer".  This song was previously released on their album "Turn the Radio Off" (1996 Mojo Records).  Goldfinger's track is pretty good, about the same quality as all the rest of their music.  The Dickies do "Nobody But Me" - a cover of the 60s song of the same name, just punked up (I like it a lot).  Smashmouth closes out the album with their version of "Why Can't We Be Friends" - a cover of the 70s song of the same name.  This song can also be found on their 1997 release.

All in all, this album is pretty good.  An average rating is a 2.5, so this receives a bit higher with a 3.5.  It has a lot of popular artists and some that are not so well-known.   None of the songs on here totally sucks, which is always a plus.  If you are a fan of pop music, this album may be suited towards your tastes, especially if you like a ska/pop mix.