Home » Other » The Spy Who Shagged Me

The Spy Who Shagged Me 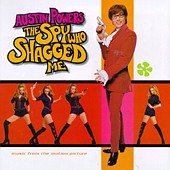 Appropriate, perhaps, that the soundtrack to a movie whose primary plot-point has its main character going back in time to recover his mislaid "mojo" should feature modern-day recording artists covering a passel of yesteryear classics. Here, for instance, we have R.E.M. doing a run-through of Tommy James and the Shondells' "Draggin' the Line," Lenny Kravitz making a pass at the Guess Who's "American Woman," and Big Blue Missile (with former STP lead singer Scott Weiland, no doubt on his latest furlough from pharmaceuticals) pointlessly noisifying the Zombies' "Time of the Season." And, last but not least, here we have the Spice Girls' oh-so-menacing Melanie G. - who is scary, indeed - sticking a thin and brittle Britney Spear into Cameo's once ferociously funk-alicious "Word Up," puncturing it beyond patching; letting the life out.

Of the above, only the R.E.M. does justice. The rest deserve arrest. Gag orders. Lethal injections. Anything to shut them up.

Elsewhere, the déjŕ not-so-new continues with Elvis Costello crooning the Burt Bacharach/Hal David chestnut "I'll Never Fall In Love Again," with Bacharach himself prostituting himself on piano. While the recorded result is hardly hellacious, it cannot hold a candle to the Dionne Warwick and Carpenters' versions of the '60s and '70s, respectively (perhaps if it had been the other Elvis… with Liberace contributing campy piano….)

Other, somewhat kinder, cuts include Madonna's latest cut-and-paste - but undeniably catchy - collaboration with William Orbit, the undisputed Grand Poo-Bah of blips, bleats, and buzzing, busy fills. Green Day contributes an engagingly spoofy spy-film instrumental (one that would have been even more engaging if it had had the good sense to end itself some sixty seconds sooner, but no use quibbling over spilt milk). And let us not forget the Lucy Nation (fresh from Madonna's Maverick label stable; oh yes, how very opportune and apropos for a Maverick-backed soundtrack), whose lead singer sounds like an exact amalgam of Sheryl Crow and Shirley Manson, and whose included tune is just as solidly listenable as it is instantly forgettable.

As soundtracks go, The Spy Who Shagged Me is hardly the worst and better than many. But unlike, say, the soundtrack to Todd Haynes' The Velvet Goldmine, which attempts much the same modern-takes-on-classic-tracks trick and pulls it off with a vein-tappingly virtuosic "Voilŕ!", Austin 2's prevalence of pale imitations and Cheez Wiz filler makes one long for the long-dead days of vinyl 45's and 8-track tapes.

But all hope is not lost. In the whoring halls of Hollywood, successful sequels have a way of breeding less-successful sequels, and not every sequel sucks (The Godfather, Part II! The Empire Strikes Back! Uh… The Godfather, Part II!) so maybe, just maybe, the third installment of the Austin Powers saga will be the charm - at least, musically-speaking.