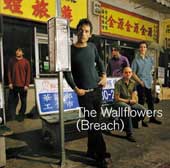 A Step in the Folk Direction
by: bill aicher

So the other day I stopped into The Den, a local convenience store, to pick up a refreshing Arizona iced tea before my next class. Upon investing the cash situation I saw my wallet was basically empty - a whole dollar. I wanted the drink so I wouldn't risk falling asleep; caffeine is my lifeblood.

It was obvious I was going to have to charge it. Charge $1.37? I would look like a freak... so I decided to pick up a CD while I was there so I wouldn't appear lame to the cashiers.

This is how I bought one of the better albums I have heard this year: Breach.

It had been four years since Jakob Dylan and his Wallflowers released their smash album Bringing Down the Horse, featuring songs such as "6th Avenue Heartache," "3 Marlenas," and the infectiously annoying "One Headlight." I personally didn't care much for the first album. It was decent, but nothing outstanding.

Breach totally reversed my opinion of this band. Maybe I have changed over these four years. Maybe Bringing Down the Horse isn't so bad after all. However, I argue the Wallflowers have simply gotten better.

The new album signals a shift towards a more "folk" sound than the last album. Sure there are pop songs on here, like "Letters from the Wasteland" and the first single, "Sleepwalker." But the best stuff is what won't end up on the radio. Songs like "Witness" and "Birdcage."

Jakob hates to be compared to his father. (Bob Dylan, for those of you who are totally clueless). However, his vocal style more closely resembles his father on the new album than on previous efforts.

His songwriting has improved as well. No, he is still not a lyrical genius like Bob Dylan or... (shall I say it?) ...Eminem.... But lines like the chorus in "Sleepwalker" are just brilliantly fun:

"Cupid dont' draw back your bow / Sam Cooke didnt' know what I know."

Ahh what a great reference to days of old.