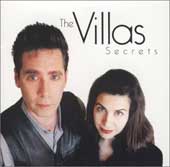 Judging from their name and the photograph that graces the cover of the Villas' debut LP, Secrets, it would at first appear that Bryan Ferry and Alanis Morissette have agreed to coordinate their talents on an eclectic collection of Linda Ronstadt-styled Mexican melodies. Closer investigation, however, reveals that the Villas are, in fact, the husband-and-wife/Adam-and-Eve team of Bill and Angel Ali Villa - a pair of persistent and plucky Pennsylvanians who, with a little help from their friends, have managed to craft themselves a gentle gem of a record. Bill is the singer, and he sounds quite a bit like that most idiosyncratic of modern rock idols, Elvis Costello - albeit with a softer center and a fuzzier fringe (indeed, it is all but impossible not to notice the Pope of Pop's melodic imprint on organ-dotted romper-stompers "You're Laughing" and "We'll Show 'Em"). For her part, Angel Ali plays an agreeable guitar and contributes some shy backing sighs - as on the slightly sinister "The Wish" and the shimmering, piano-and-nostalgia-enhanced ballad "When We Were Friends." Elsewhere, one suspects that the Replacements' Paul Westerberg would gratefully accept credit for "Pull You Back"'s barreling bounce, and "Like There's No Tomorrow"'s joyous jingle-jangle comes courtesy of the Byrds and Big Star.

With its ten songs clocking in at a pithy 34 minutes, Secrets is a record that begs corny metaphors: the warm bowl of oatmeal on a cold winter's morning; the calm, blissful blood-rush of a post-coital cuddle; and that reluctant-yet-radiant rainbow that tempers the tempest and colors the flood. Secrets is also, essentially, a throwback album - an old-fashioned exercise in pleasantly mellow, solidly melodic pop that neither suffers fools gladly nor takes itself overly seriously. While its somewhat muffled, lo-fi production may prove a frustration to some, others will appreciate it for being so refreshingly free of Überstudio, Backstreet sheen.

Ultimately, then, these Villas are of the decidedly British variety: humble and homey with just a small yard and garden. But the garden is charming. And these "secrets" are keepers.