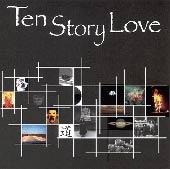 I know it may sound weird, but when I was listening to this record, I couldn't stop thinking about TV sitcoms, specifically NBC sitcoms. That's because Ten Story Love, a New England-based rock quartet, plays the same type of overly-happy pop rock on its debut album that you hear used as sitcom theme songs on shows like Friends and Jesse. This is the type of music which has very little lasting value, but corporations like to use it because it's upbeat, inoffensive, and catchy (in a very annoying way). This music just makes you want to sway back and forth with a big, dumb, mindless smile on your face. This stuff should only appeal to the type of people who prefer appearances and a "nice melody you can hum along to" to substance and timelessness. Hopefully, Music-Critic.Com readers are smarter than that.

The band tries to address many different issues on the record, like love, relationships, work, individual freedom, heartache, philosophy and pop culture, but it all comes out sounding the same. The songs seem to blend together and become repetitive Even the lyrical rhyme schemes seem predictable and not very deeply thought out. There's a very amateurish feeling about the whole album, including the packaging. When you take the CD out of the case, a stick-figure drawing of the band members. At the bottom of the liner notes it says, "Ten Story Love invites you to join us next time at the Egyptian Hall." (Should we say, "same bat time, same bat channel," perhaps?), as if everybody listening to the album knows where that place is and has access to it. One has a real feeling of being in the minor leagues here.

The musical flaws present are numerous. The album opener, a saccharin pop rocker called, "The Perfect Girl," has a lyrical accent in the chorus that sounds stupid. "She's THE, Perfect Girl/She's THE, Perfect Girl/But she's not mine." Obviously, the heaviest accent belongs on the words "perfect girl" instead of "the". Also the lyrics and melody are reminiscent of "My Best Friend's Girlfriend." by The Cars. "She's my best friend's girlfriend/But she used to be mine." The Cars' song is better.

That's not the only ripoff on the album either. The guitar melody of "All Cried Out" sounds just like the song, "Breakfast at Tiffany's", so much so that when I first heard it, I started singing the lyrics of that song, ("You say, that we've got nothing in common/No common ground between us/And we're falling apart"...), and it fit perfectly.

The song "Marian On The Steps" attempts to use opera singer Marian Anderson's groundbreaking 1939 recital on the steps of the Lincoln Memorial as a metaphor for personal freedom, but the allusion probably goes over the head of most listeners (Who's Marian?) and it sounds like just another happy pop song. It seems like just another episode of the sitcom. Maybe the kids were learning about Marian Anderson in school for Women's History Month? After the song fades, you hear the melody of "My Country 'Tis Of Thee" played on a set of bells. That, of course, was Marian's big number, but here the great patriotic song just seems like an afterthought and sounds childish, as if it were played by a 2nd grader in music class for the big test.

As mentioned before, the songs often seem like sitcom episodes or names of sitcoms. "A Different World" (Remember the Cosby Show spinoff A Different World?) is about all the trash we are exposed to on TV, but sounds mindless itself. "This Island Earth" (Did someone say 3rd Rock From The Sun?) is a sarcastic look at religious and philosophical differences between people, but the group fell in love with sound samples and included a countdown to a space shuttle mission as the intro, making the track sound pretentious. They even dared to include Neil Armstrong's famous, "This is one giant step for man, one giant leap for mankind," quote at the end, thereby corrupting one of the great moments in human history.

Overall, Ten Story Love's debut album sounds like calculated and contrived pop music instead of honest, heartfelt rock and roll. I don't think it will sell well, but on the bright side for the band members, they could have a promising future writing for MustSeeTV. Finally, if you are in a big city and you hear a worker on a skyscraper shouting at a beautiful woman passing by, "Yo baby, I've got your ten story love right here!", it's a good bet that he isn't talking about this album.

And if you liked that joke, I'll be at the Egyptian Hall all week, wherever that is.