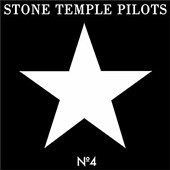 Weiland is Back, and He Has Progressed
by: steven jacobetz

It's great to have the Stone Temple Pilots back. Lead singer Scott Weiland is out of jail for his drug problems and he's clean (hopefully forever). The band will tour with the Red Hot Chili Peppers in the late summer. Their sound is revitalized, as evidenced by the latest album, No. 4. It's like 1992 all over again.

This is the sound of a band with something to prove to a world which had almost left them for dead. This album is much more based in the band's hard rock roots, and the results sound much more focused than on 1996's inconsistent Tiny Music album.

From the first bars of the opener "Down", it is clear that STP has found its direction again and means business. The sixties psychedelic era experimentation of Tiny Music hasn't been totally dropped though. It can be heard clearly on songs like "Church On Tuesday", "Sour Girl" or "I Got You".

Sometimes the group's vocal harmonies sound almost too period-specific, reminiscent not only of The Beatles, but also of music-industry fabricated groups like The Partridge Family and The Monkees. The band almost crosses the line of good taste, but the stylistic diversity is impressive and is evidence of a band which is so much more interesting and talented than some critics who labeled them as simple Seattle grunge knockoffs early in their career would make them out to be.

The last song on the album is the ballad "Atlanta" in which Weiland does his best Jim Morrison impression is very effective. The string arrangement and the fadeout to the marimba at the end is impressive and shows yet another stylistic side of the band.

Really, who better to do Morrison than Weiland? Their biographical similarities in terms of substance abuse and trouble with the law is almost scary. However, the main focus of this album is in hard-rocking songs like "Down", "Heaven and Hot Rods" "Sex & Violence" and "MC5".

There's no doubt that STP is back in full force and showing the freshness and intensity of 1992's Core and 1994's Purple. People who have seen them in concert recently all seem to say that they've never looked or sounded better. Hopefully, there will be a lot more to come. Just pray that Weiland stays clean.