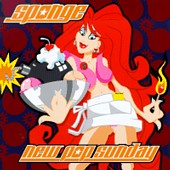 This is the song that never ends; it just goes on and on my friend...

At least that is the impression given off by Sponge on this, their third album. It is an album of pure pop rock, devoid of substance, that becomes a monotonous hum behind your ears. And, while it may be true that there is nothing totally outstanding lately in the world of pop/alternative rock, Sponge felt it was their purpose in life to reiterate this notion.

Kicking off the album is "My Lackluster Love," a superb example of a boring song. Choruses of "la la la" fill in the last half of the song, which help to wake the listener from the daze the first half of the song had previously set in. Upon awakening, the listener is greeted with the simple question of "Where the hell is this song going?"

The answer is: no where, which basically sums up the rest of the album.

With its abundance of sugar-coated pop mediocrity, the album may have been better titled New Pop Sundae (much like the cover art suggests). There is nothing inherently wrong with any of the songs on the album. Guitar work by Joey Mazzola and Mike Cross shows off definite musical talent. Dombroski's vocals are strong, and his voice has the rough edge that has rung out such hits such as "Molly" and "Wax Ecstatic."

One is left in disbelief as to what went wrong. The problem lies in the lack of effort and emotionality put into the album. The instrumentation and vocals both lack dynamics. Repetition seems to be key, with the same vocals and riffs coming back over and over throughout each song. Almost every song is set to about the same tempo, leading to each blending into the next. As the album comes to a close, it is difficult to distinguish where one track ends and the next begins, like a song that never ends. The result is an album reminiscent of Gin Blossom's Congratulations I'm Sorry or Candlebox's Lucy; pure, contrived pop.

To be fair, there are a few places where the band does shine. "Disconnected" incorporates horns into the background, bringing them to the forefront in a powerful close. The album's closer, "Lucky" does showcase the band's talent, paying special attention to guitar work. The rest of the album is where Sponge fell short. It seems as if they decided it was time for a new album, so they went to the studio, pumped out a collection of ear candy, and tossed them onto New Pop Sunday. I have come to expect more quality and insight from this band, perhaps album #4 will be It's Monday, We're Back to Work.