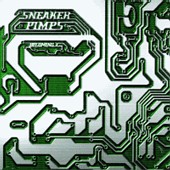 What's a pretty girl like you doing in a music scene like this?  Could it be... kicking out the jams?  Possibly.  Vocalist Kelli Dayton, offers her soul on this album.   Her voice is sullen, yet sexy at once - impaling the heart while at the same time setting the body quivering. The band members set the style of an electronica-pop mix with their catchy melodies, laid-back, deep basslines, and samples from an array of musical styles.

This group, hailing from the UK, got their big break with the soundtrack for The Saint.  Their track on the soundtrack was "6 Underground" - their only single thus far, that I am aware of.  Becoming X includes two versions of this pimpin' track, the original, and the Nellee Hooper Edit (the one on The Saint).  This laid back hip pop track, which I am sure many of the readers have heard, features a low, driving bassline, a simple keyboard lick, and above all, Kelli's vocals.

The album starts out with that cool bass sound familiar to the Sneaker Pimps on "Low Place Like Home".  This repeating bassline/melody is one of the catchiest on the album.   It repeats throughout the entirity of the song, making a it a song to just chill to.  Echoes are added to Kelli's vocals on key points in the song, making her sound more hardcore than usual.  To add to this hardcore feel, there is the added guitar crunch, increased percussion activity, and upping of the volume at climaxes throughout this track - making it one of the best tracks on the album... an emotional rollercoaster.

The next track is one of the most upbeat found in the album.  There is the familiar low bassline, however, the melody is set with a synthesized flute.  The percussion is very trip-hop, going into a fast breakbeat on the choruses.  At times an echo is added to the percussion, creating a very cool, original effect.  It is not used so much as to become annoying, but just enough to make the musical point.  The track has been compared by a few of the big music magazines as being a kind of B-52s ripoff, but I fail to see it.  (However, they have also compared their basic style as being akin to a mix of Garbage and Portishead - which is the perfect description).  "Tesko Suicide" is one of the most original tracks on the album, and lends to a nice variety on the album.  However, it should have been placed later on the album for reasons I will get into later.

After the next track, "6 Underground", we begin what is the downside of the album.  While they do have an interesting sound, and I like the album, it is monotonous.  Most of the tracks sound more than a little alike.  The few tracks that sway from this monotony are "Spin Spin Sugar" and "Post-Modern Sleaze".  (If you ever find it, there is an awesome remix of Spin Spin Sugar" but I forget who did it.   Let me know who it was please...)  Of these two tracks, "Post Modern Sleaze" is the most interesting.  The melody is played on guitar, and the percussion is a simple drum/high-hat beat.  In the back however, various instruments are sampled throughout - causing the track to sound very tribal and mysterious.  But, uh-oh.  Houston, we have a problem - these tracks are right next to each other as well.

After "Post Modern Sleaze" there are five more tracks of nothing totally extraordinary.  If they would have spaced out their variety a bit, this  album would have reached a little bit higher on my kick-ass-o-meter.  The CD is good, but not "da bomb" material.  The spacy sound, with the laid-back bassline makes it a very dreamy album.