Home » MACHINA: The Machines of God

MACHINA: The Machines of God 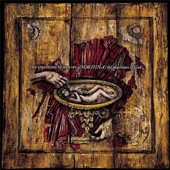 Billy Corgan and the gang are back, revitalized and kicking out the tunes like the glory days before Adore, their album in 1998 that was judged a flop. Amidst controversy and problems the band plunges forward, getting back to what they did best: make great music with powered up guitars and drums and Corgan belting out the vocals in his unique melodic fashion.

After listening to this album for the first time there is one definite conclusion, after wandering around for the last couple of years, the Smashing Pumpkins are trying to find themselves again. With Jimmy Chamberlin's return after being fired for drug problems, and Hole's bassist, Melissa Auf der Maur, replacing D'arcy Wretzky the band was able to pull together and crank out MACHINA.

With the reoccurring theme of Love, Drugs and God, Corgan gives the listener 73 minutes of music that returns to the old form. Getting back to the things that they do best, Smashing Pumpkins finds their way back to the roots: play it hard, loud and grungy; letting all the skeletons out of the closet putting together MACHINA.

Corgan also brought back into the production works Flood, who helped out on Melon collie and the infinite sadness, to help simplify and find that winning sound. Everything that was lacking in Adore seems to be making a slight appearance, maybe Corgan was able to let some of his ego deflate a bit and listen to others on what needs to be done.

Although the album is good, upon the first listening there was some reservations to whether this album would cut the mustard after the flop of Adore. After listening to it numerous, and I mean numerous, the album tends to grow on you and present itself as a winner. Corgan has not brought the band out of the ashes, he has taken the right direction with MACHINA, and is paving the way for future albums, he just needs to shorten up the album, 73 minutes is a lot of listening.