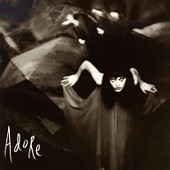 We have two points of view on this album here for you to check out. The first was by someone not comparing the new work to their older, giving it a fresh look, and avoiding any connotation "Smashing Pumpkins" may imply in the mind of a previous fan. The second was by a fan of the earlier, grunge-rock sound of the Pumpkins, pre-Adore.

On Adore, the Smashing Pumpkins prove that the reason they have risen above the ashes of grunge's demise is that they have always been focused on the music rather than the image. The last disc, 1995's Mellon Collie and the Infinite Sadness was a sprawling, two disc, two-and-a-half hour opus that was for the most part worthy of its length, but had it been trimmed down to its better half it probably would have stood the test of time a bit better. "Adore" has no such problem - lead singer and songwriter Billy Corgan is reported to be a songwriting machine, shockingly cutting their current tour short to work on another record this fall, and there were undoubtedly hours of material that could have stretched this CD into another double set. But Corgan wisely chose to consolidate and pick a cycle of songs that fit together, and what he and the Pumpkins came up with is an even better album than Mellon Collie.

Fans of the blistering Pumpkins' angst anthems on their first three CDs will have to wait at least a few months - "Adore" is mostly a quiet storm, but such an intense one that you hardly notice. We've now come to expect no less than perfection from Billy Corgan in writing and singing his dark tales of loneliness; yes, it does get pretentious at times, but he just does it so well it doesn't matter. A song like "Shame" is so simple - words like "you're gonna walk on home / you're gonna walk alone / you're gonna walk so far / you're gonna wonder who you are" make the song kind of a gothic nursery rhyme, but combine it with a mesmerizing slightly-out-of-tune guitar hook and you have an instant Pumpkins classic.

In spite there being very little in the way of upbeat tunes, there's an amazing amount of variety here. "Perfect" is an irresistible slice of candy-coated pop, "Once Upon a Time" is a catchy, almost bluesy dirge, "The Tale of Dusty and Pistol Pete" adds a sing-along, countryish element to the Pumpkins repertoire, and "Appels & Oranjes" (which would make a great single) is a cute list of "what if"s over a new wave beat that's almost (but not quite) danceable. The album's third to last track, and ultimately its centerpiece, is "For Martha," a fantastic whisper-to-a-scream, Stairway-to-Heaven-emulating ballad that gets better with every listen. The abrupt left turns on the guitar solo are like nothing that has been recorded before, and more than make up for the lack of trademark Pumpkins guitar work on most of the songs. With the exception of the rather crude "Ava Adore" which doesn't really fit too well, every song offers something completely different and unique.

Give Adore some patience and it will ultimately be your go-to CD for when you feel contemplative and philosophic. Some may accuse the Smashing Pumpkins' music of excessive self-indulgence, and they would probably be right, but there are few groups around these days who can channel their indulgence so well. You can sell your pain all you want Billy, this reviewer will keep buying it.

Would the New Beatmaster Please Raise His Hand? by: bill aicher

It has been called "The 90's White Album".  This is due to the major changes the Pumpkins have gone through in the music on this album.  Gone are the nasal, angered lyrics of past.   For, Corgan has found beauty - or at least he thinks.  This is a new Pumpkins.   They realize AlternaRock and Grunge are things of the past.  So, they leave them in the past.  We no longer have any of the screaming inherent on tracks such as "Cherub Rock" or "Bullet With Butterfly Wings".  Corgan has left that behind.

Upon the first listen of this album, one can see the changes.  In fact, one can notice the change with the first lyrics offered.  Corgan begins the album singing "Twilight Fades" and in these two simple words, the listener can see he or she is in for a different kind of musical experience than what is normally expected of these rock icons along with their leader - the so-called "King of Alternative Rock".

If you are at all familiar with the Smashing Pumpkins, you know that a few years ago their keyboardist died of a heroin overdose and drummer, Jimmy Chamberlain, was kicked out of the band for drug abuse as well.  They enlisted help of Filter's drummer and a keyboardist from The Frogs to finish their tour in support of Mellon Collie and the Inifite Sadness.   With the loss of these influences, we see a major change in the Pumpkins' music.   (You may have noticed neither of the two members have been replaced on the new album).  Instead of the grunge/alternative rock we have becomed accustomed to hearing from the Smashing Pumpkins, we instead are introduced to a new sound.  This new sound includes a mix of drum machines, beatboxes, electronic samples, and acoustic guitar.   It is not something that has been done yet - exactly.

However, we have already heard acoustic guitar.  We have already heard electronic drum beats.  What Corgan does here is nothing new.  It is new for the Pumpkins, and at the time they decided to go this route it was cutting edge.  This album is just released to late for it to take the world by storm.  Many may argue that Corgan is selling out, this is not true, as you can tell he is much more comfortable in the position he is in now than that which he held previously.  The album is produced very beautifully - props go out to Corgan for that one.  But there is no denying that it is just not anything too exciting.  Previous fans of the band may be displeased by the new music, not a definite, but a possibility.  It is much the same as with the new Metallica efforts.

The music scene has changed, and their style of music is no longer the "hip" thing.  So, if Corgan raised his hand - put it down.  You definitely are not the new BeatMaster.