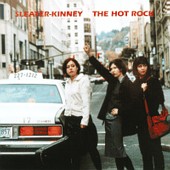 In the post apocalyptic world of late '90s rock and roll, bands that still believe in the redeeming graces of crunching guitar chords, blood-curdling vocals and a 'fuck you' attitude are few and far between.

But there are holdouts, and Sleater-Kinney is quite possibly the best of the bunch.

Like a band of guitar wielding Ted Kaczynskis, this female trio from Portland, Oregon, survived the North-west's great grunge movement with a pair of gritty independent releases - 1996's Call The Doctor and 1998's Dig Me Out - that generated plenty of critical buzz and set fans of raw rock ablaze.

Now, with its third full length release, The Hot Rock, Sleater-Kinney seems primed to take its hard-driving brand of punk-pop to a national audience. Too bad the album doesn't quite live up those lofty standards. Unlike Dig Me Out - easily one of the best rock albums of the last few years - which showcased the band's penchant for shotgun blasts of staccato rhythms and quirky harmonies, Hot Rock goes for a more pensive approach.

Blistering sub-three minute shots of sugar sprinkled punk rock are substituted for meandering songs that hunt and peck around greatness, but never seem to find their mark. Standout tracks like "Start Together", "God is a Number" and the bouncy "Get Up" are overshadowed by numbing numbers like "The Size of our Love", "Don't Talk Like" and "Burns Don't Freeze".

Lead singer Corin Tucker's vocals reach wonderfully quivering heights and the churning engine room of Carrie Brownstein and Janet Weiss seem up to the challenge, but by the end of the album you're left wondering just where they've taking you and why you agreed to tag along. At least they're trying to evolve - something many of their now-extinct brothers and sisters from the Northwest refused to do. Besides, after two post-grunge classics, it's probably safe to give Sleater-Kinney the benefit of the doubt.