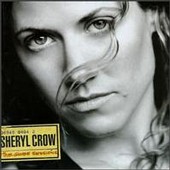 Sheryl Crow is back with her third full-length major label release.  Most of you probably remember her breakthrough album, Tuesday Night Music Club, with the hit "All I Wanna Do (Is Have Some Fun)."  Her second album was a smash as well, probably doing a better job of getting her name out than the first.  Sheryl Crow included such singles as "If It Makes You Happy" and "Everyday is a Winding Road."  The new album's first single is "My Favorite Mistake" and has been receiving heavy rotation on the radio as well as MTV.

The new album is somewhat different than her previous works, focusing more on the music than before.   The attention has been taken away from catchy-pop riffs, working for a more artistic approach.  The guitars are more raw, with heavier chords.  There is actually a guitar solo on the disc, in "It Don't Hurt".  Led Zeppelin is a definite influence in the guitar style found on this disc.  It is especially apparent in "Riverwide" which is slightly reminiscent of "Kashmir."   "There Goes the Neighborhood" includes alto sax accompaniment, providing a backup solo in parts.  And "It Don't Hurt" contains harmonica backup and solo work.  Another addition is that of strings on some tracks, adding a bit of depth to the music.

What about the vocals?  Well she has gone places there too.  She sounds more mature, if not more depressing on this album than on those past.  Yes, I know she has never been the happy-go-lucky type, but this one sounds sadder than earlier ones.  She uses her voice as a musical instrument more as well, keying in to the other instruments and complimenting their sound.  In sync with that more depressed song is the seeming lack of radio hit music.  There are not as many radio-friendly tracks on The Globe Sessions as on Sheryl Crow.  This can be a good thing though - maybe that way I will not be bombarded with Sheryl Crow all the time.

Well I suppose you would like an overall comment on the album.  Should you buy it?  I really don't care all that much if you do or not.  I have the album and that is all that matters to me.  It is quality work, much more musical than her early stuff.  If you are a fan of her pop sound, you may be disappointed, because the only two songs that are even close to pop on this album are "My Favorite Mistake" and "Members Only".  The first of which is on the radio, so you can hear it all the time anyway.  The second is a little too lyrically harsh to be a radio song, unless they want to play "And all the white folks shake their asses/ Looking for the two and four/ I'll have mine in martini glasses/ 'Cause I can't take it anymore."  It would be a nice single, but we will have to see.  If you want to hear what I am talking about, go get the disc.  I already have, and it was well worth it.