Why do the Rock so Hard? Album reviews.

Home » Why do the Rock so Hard?

Why do the Rock so Hard? 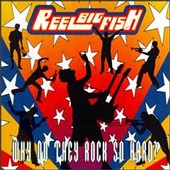 Thank You for Not Moshing
by: bill aicher

And now, the moment you've all been waiting for.... the followup album to Turn the Radio OFF! YAY! I know all you ska kids are going nuggity over this news. The "sellout" ska band has returned with Why do they Rock so Hard? and it is another quality work. You can tell they have progressed over the past few years, afterall they have done a lot in the meantime. Other than spending time touring, they have started their movie careers, portraying themselves as the house band in BASEketball (soundtrack review) and put up a cover of A-Ha's "Take on Me" for the album.

The new album's title speaks well for the album. Guitar is much more prominent on this CD, almost making it a rock album with an added horn section at times. This is not a bad thing though, as they pull off the sound well, with guitar solos and all. The horn section has improved greatly in the time since we last heard the band too. More solos, crazier riffs, and some cool lip slurs are all here. "Thank You for not Moshing" sounds more like punk ska than any of their early stuff, close in style to some of Green Day's more recent work. This is no shock though, seeing as how RBF offered up their horn talent for Green Day in their latest work. Although some of the tracks sound like rock songs, there are still plenty of total ska tracks as well, especially "You Don't Know" and "I'm Cool" (which sounds similar to early Sublime).

They have not lost any of their smartass attitude in the lyrical department either. My favorite track is "Thank you for not Moshing," a song that basically rips on all the hardcore moshers. "When I'm in the pit / I'm gonna punch and kick / when I'm in the pit / I'm gonna fuck up shit." They are still cocky as hell in their lyrics, and I laughed my ass off when I reviewed the disc.

If you are a die-hard ska fan, you already know not to buy this disc, unless you are different from those I have found. Most die-hard ska fans hate Reel Big Fish, but if you don't fall into this category you are sure to love it, especially if you liked their last album. They have progressed in many ways, and "everything is cool."

Oh yeah, be sure to listen to the hidden track for some fun extra-curricular activity.