Home » The Battle of Los Angeles

The Battle of Los Angeles

Rage Against the Machine 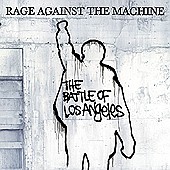 It Has To Start Somehow
by: bart blasengame

Like a militant musical strike force, Rage Against the Machine has spent the last seven years dropping napalm bombs of revolutionary thought into the seedy consciousness of rock and roll.

With a rapid fire lyrical message every bit as heavy as the music that shoved it through the speakers, Rage put politically conscious rock back on the map. Just like NWA's Straight Outta Compton opened up the eyes of white American to the warfare of the inner city in the late 1980s, Rage's self-titled 1992 debut (review) unlatched the lock on such taboo subjects as war in Central America, communism, anti-government thought and the struggle of Latin Americans here and back home.

And to boot, Rage's furious blend of hard rock and rap - something previously unheard of in the industry - was something you could bob your head to even if the message flew high over your head.

But it's been nearly seven years since the band's first aural distress call and in that time rock/rap frat heroes like Limp Bizkit and Kid Rock have brought Rage's sound to the mainstream.

So, what do the kings of the genre do to shake the system back up? They release The Battle of Los Angeles and watch the fires of musical revolution burn more violently than ever.

With lead singer/rapper Zack De La Rocha back in the pulpit, and guitartist Tom Morello, bassist Y.Tim.K, and drummer Brad Wilk churning like a steam engine behind him, Rage has put together the album of its career - lyrically sharper and sonically superior to anything else in their catalog and just maybe the best album of the late 1990s.

A perfectly fucked up postcard from the edge of the millenium, The Battle of Los Angeles picks up where 1996's Evil Empire left off, painting fiery pictures of the disinfranchised and the white hand that keeps them down. With his voice rasping sharp as ever, De La Rocha launches into capitalism, the media, eurocentricity and politicians that are too worried about oil and money to lift a finger.

De La Rocha reserves most of his venom, however, for the imprisonment of Mumia Abu-Jamal. At least two songs deal with the jailed journalist and former Black Panther sentenced to death in the 1981 shooting of a Philadelphia policeman, but none more poignantly than "Voice of the Voiceless." In almost child-like adulation, De La Rocha praises Abu-Jamal and promises, "My Panther, my brother, we are at war until you're free."

But however much Rage's sound is connected to De La Rocha's voice and free-flowing delivery, the groundbreaking sound of Battle of Los Angeles comes courtesy of Morello. No guitarist in recent memory has single-handedly pushed his band into another musical atmosphere the way Morello does here.

Morello has used the three years in between albums to build his arsenal to include the spacey ambience of The Edge, the experimental scratching of Jimi Hendrix and the classic power riffing of Jimmy Page. With Morello leading the charge, Rage breaks from its usual verse-chorus-chant pattern and journeys into new, more exciting territory. Check out the drilling six-string sound of "Testify", the soaring screams on "Calm Like A Bomb" or the chugga-chugga march of "Guerilla Radio" that kicks things into gear.

But it's on the album's later tracks that Morello really hits his stride. Under his guidance, "Mic Check" sounds for all the world like The Root's stutter-step hip-hop of Things Fall Apart's "Without a Doubt". And the opening of "Voice of the Voiceless", with Morello turning his guitar into an acid jazz flute one minute and a slippery turntable the next, transforms the song into a patriotic march towards oblivion.

It's on Battle's next to last track though, where everything really comes together. Between Morello's tapping out a lonely rhythm, Y.TIm.K's massive bass bottom and Wilk's stop and go drum rips, "Ashes in the Fall" sounds like something The Dust Brothers would conjure up on their mixing board. By the time De La Rocha joins the fray ranting against modern day fascism, Rage has worked itself into a steel fist of furious sound that other bands can only dream about.

To be sure, Rage's hardcore sound is sometimes exhausting, and De La Rocha's high brow idealism is sometimes tough to keep up with. But just knowing these guys are out there on the fringes fire bombing the establishment makes it easier to have a little faith in the future.

Like De La Rocha whispers on "War Within a Breath", "Everything can change on a New Year's Day." For some of us, it already has.