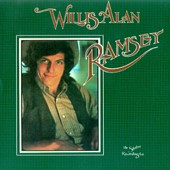 There's something unique about listening to an album that you know was recorded a long time ago but you haven't yet heard, or in the case of Willis Alan Ramsey, haven't even heard of. But those who do know of this 1971 album will undoubtedly let out a sigh of relief that it has finally been reissued; "One of the greatest records of all time," as Lyle Lovett is quoted on a cover sticker - and though that may be a slight exaggeration, anyone who is a fan of the mish-mash of folk, blues, country and rock of the 1970s will instantly reach the most-likely-accurate conclusion that this record, though never a big hit itself, was a huge influence on artists such as the Eagles, Jackson Browne, Linda Ronstadt, and countless others.

In fact, Willis Alan Ramsey's self-titled disc contains "Wishbone," covered soon after by Leon Russell, and "Muskrat Candlelight," reincarnated and rendered far less revelant as "Muskrat Love" (same song, same lyrics, more commercially accessible title) by both America and (gulp) Captain and Tennille. But even the tunes that weren't covered sound instantly familiar - Ramsey does a proto-Don Henley on the country ballad "Goodbye Old Missoula," evoking the same mix of country twang and rock desperation that the Eagles would later do so well. "Ballad of Spider John" is more music-hallish in nature, bringing Randy Newman to mind. "Boy From Oklahoma" tells a sad story and brings more tears to your eyes than most Jim Croce or Don McLean tunes. The bluesy and strictly-acoustic "Satin Sheets" could even fit in on Led Zeppelin 3. Even the players are recognizable - true connosseiurs of '70s California rock will know that fiddle player Dusty Rhodes, bassist Leland Sklar and drummers Russ Kunkel and Jim Keltner were some of the most ubiquitious studio guests of the decade, appearing on landmark releases like Warren Zevon's "Excitable Boy" and Karla Bonoff's self-titled debut. Any '70s album that features members of this group is going to pack a wallop, and this is no exception.

But lest it be thought Willis Alan Ramsey wasn't an original talent, above all the album is the sound of a unique songwriter pouring his heart out to the tune of 11 timeless standards. They just don't make'em like this anymore.