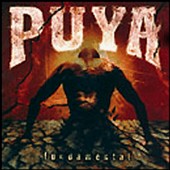 A New Interpretation of "Horizontal Mambo"
by: bill aicher

Did you ever think it possible for a heart attack to be brought on by Latin salsa music? Well, now that golden opportunity can be yours with the new album from Puerto Rico's own Puya. This is music to traumatize your grandmother with.

The plan is simple. Inform Grandma Martha that you just found out about this great new group. They are a rock band, but she may appreciate the heavy Latin influences found therein. Once she agrees, toss in the disc, press play, and get the phone. Now is the time to call 911. While you are waiting for the ambulance to come cart her away, you can enjoy the music found on this album. It was, afterall, made for you, not a weak-hearted senior citizen.

Now that you are free to take listen to this album in peace, you can enjoy its original musical stylings. Puya has found the happy medium between Pantera and salsa; definitely nothing you have heard before. This is not to say it is good or bad, mostly interesting. The album's opening track "Oasis" is the hardest, setting a Latin vibe under a guitar crunch as thrashing as anything Deftones have ever done. "Montate" (meaning Get On It) is similar in style to a Korn track, but once again including the salsa beats that set this band apart from the rest.

The music slows down a bit after the "Montate." "Whatever" focuses more on the band's Latin influences than their rock. It is more of a groove song than a "thrash 'til you bleed" track. One of the coolest tracks on the album is "Keep It Simple," a track with heavy R&B influences. The slow and steady drumbeat in the back is coupled with an R&B guitar riff as well as violins, vibraphone, and a flute solo, yet never losing the salsa feel found throughout the rest of the album. The rest of the album consists of a return to their heavy sound.

My only complaint is the problems I have understanding what it is that they are trying to say. Perhaps that is because I don't understand much Spanish - at least half of the album is in their native language. If you are into bands for their music alone, there is no problem for you with this disc. They are definitely a talented group of individuals. The fact that I can't understand most lyrics is unimportant. It doesn't change the fact that this album rocks. Any fan of Deftones, Korn, Limp Bizkit, or the like should definitely give them a listen. Besides, who, other than grandma, can resist some good old-fashioned death-mambo?