This is Hardcore Album reviews.

Home » This is Hardcore 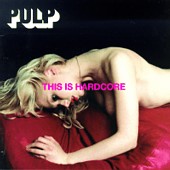 Jarvis ("I am not Jesus, though I have the same initials") Cocker has certainly become a household name in Britain over the past couple of years.  Jarvis, who? you say?  Not surprising.   Pulp has taken its time breaking through the confines of hippity-hop Brit-pop and charging head-on onto the US’s music scene.  In fact, it had taken twelve years for the band to gain some much-deserved respect in the UK with their ground-breaking 1995 album, Different Class.  (For those of you lacking mathematics skills, that would date the formation of the band in the year 1983, when Sting had a lot more hair and U2 were still sporting some strange quasi-afros.)

With the release of their album This is Hardcore, Pulp has shown that a great album is better late than never.  They have discovered that Brit-pop does not have to be manufactured from a plastic mold with too-cheery vocals and a skippy drum beat.  This album is much darker than its compatriots, lamenting the fact that we are all aging and getting closer to death with every breath we take (sorry-- that was an unintentional Sting reference).

The first track, "The Fear," has an eerie "Hotel California" quality coupled with Freddy Mercury vocals by Cocker -- you can see why this song may become a bit too mellow-dramatic and even ridiculous after the first verse.  The other songs, especially the ballad "Help the Aged," are of a more fitting emotional quality.  The band introduces some cool jazz brass into the title track ("This is Hardcore") and produces a Perry Mason type bass line.  Jarvis’s vocals are superb (of course, not as superior as those of Britain’s chief agonizer, Thom Yorke, but adequate) and the creativity in instrument choice and style are a breath of fresh air.

Just because of the subject matter, do not think that Pulp has taken on a sentimental air.  They approach aging with dark bluntness, with lines like, "Help the Aged / One day they were just like you / drinking, smoking cigs and sniffing glue" ("Help the Aged").

But why dedicate an album to the countless helpless in geriatrics wards and aging night-clubbers?  It seems Jarvis Cocker has reached his mid-thirties, which will in time give way to middle-age -- time for cholesterol checks, love-handles, hair loss, but most of all, maturity.  This new-found maturity has led to the realization that albums can be given a more cinematic quality.  In fact, This is Hardcore plays just like a movie, jumping back and forth between youth and the geriatric ward.  So sit back, grab a bucket of buttery popcorn, and enjoy the show -- that is, if you aren’t worried about your cholesterol.