Is This Desire? Album reviews.

Home » Is This Desire? 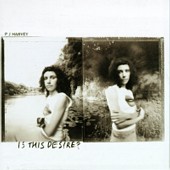 I Want To Know What Love Is
by: bill aicher

Neato.  I like this album.  Yup, stuck it right out there, this album is good.  If that is all you care to know, you can stop reading the review now, but I promise to go more in depth later.  Hell, I will even throw in some reasoning, so read on gentle stranger.

Why is this album good?  Well, because it is different.  It is sad, it is depressing.  There is no hidden hope found in here.  Harvey goes right out and lets everyone know that love can suck.  The title for the album (Is This Desire?) fits the mood of the disc perfectly.  Most of the lyrics delve into the damaged psyche of those looking for love.  "Angelene" (the opening track) is a tale of a woman ready to accept payment for services, but she is longing to be loved, to be held, to be wanted.   In fact, the idea of a want for love is the driving force behind this album.   Most songs are from the perspective of a longing woman, although some are from the views of an onlooker.  "Catherine" is a change from the female view, giving us that of a man.  Harvey shows that emotion is not something only owned by the women of the world.  Her use of imagery in the lyrics as well as her sultry voice make the album become a beckoning call like that of a siren.  "Come to love, don't fear the harm it could cause.  It is all in your mind."

There is more to the album than the lyrics though.  The music is there as well, complimenting the words to a T.  All of the music on the album is dark and dreary, except for when she becomes upset or enraged at the pain and torture found in loving.  In these places, the drums kick in, or her voice becomes distorted.  The musical work on this album does an excellent job of showing the feelings Harvey is attempting to show.  "My Beautiful Leah" cuts out all music at the last line "Then I'm Better off Dead."  If you listen to the lyrics before that line, and understand what she is showing - the fact that the lack of love can drive one to such desperation as to wish for death - this simple cut off makes the song awesome. And just think, you have another 11 tracks to listen to.

This is by far PJ Harvey's greatest album yet.  She returns to a sadder time, like those found in her earlier albums.  If you are looking for a change from the normal happy or plain angered woman sound, PJ is for you.  She is sad, she feels, she realizes life is not sweet.  She just wishes it was.  Maybe she will find something other than desire - like true love.