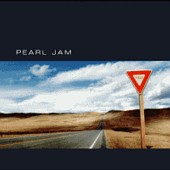 The First Mammal to Wear Pants
by: bill aicher

Pearl Jam has done it again.  They have released yet another great album.  This album continues in their road from a rough grunge beginning to a civilized rock.  Many people still think of the grunge era when they think of pearl jam.  Rock choruses such as Jeremy and Alive more than likely come to mind.  Maybe you think of the rock ballad Black or the more recent Betterman.  Nevertheless you probably think pent-up anger.  After all, that is what Eddie and Co. are all about right?

Wrong.  This album goes the extra distance to prove what No Code failed to do.  Pearl Jam is not just about angst and aggression.  Through this, their latest release, we discover a grown up Eddie Vedder.  The band returns to the rock style many fans have been craving since the 1991 release Ten.  But this time around we get something different.   The band continues to rock, but Eddie puts aside his hateful feelings and aggression from earlier works and goes deeper into his psyche.

This is not to say Eddie does not try to tackle issues he feels important to him through the album, actually it is quite the contrary.  What we do notice is a more refined style to his lyrics.   There is a deeper meaning there, as in his previous works, but the issue, not the anger that is focused.  In fact, there is a kind of parody about their musical style on this album.  The chorus of "No Way" contains the line "I'm not trying to make a difference.  I'll stop trying to make a difference, no way".   This song has been called a satire by fans who believe Eddie's underlying meaning is that no matter what, he is not going to stop trying to make a difference with his music or charity work.  (You may recall the ticketmaster fiasco from a few years back).

Eddie's songwriting tackles other topics such where the world is going and why exactly we think we are the chosen ones.  Brain of J[FK] is based mostly upon the people who claimed to have JFK's brain in a jar a few years back.  "The whole world will be different, soon, the whole world will be relieved" is another satire upon the mentality of the general population and their desire for redemption.  Do the Evolution is one the hardest rocking tracks on the album, as well as another great satire upon human's and their beliefs that we are special.  "I am ahead, I am advanced, I am the first mammal to wear pants" and "I'm a thief, I'm a liar, there's my church I sing in the choir" points out some great irony in why we as humans, feel we are above all others.  Faithful includes "faithful, we all believe it.   M.Y.T.H." which is supposed to cause the listener to question their beliefs, a topic that is brought up later on the CD on a track called Push Me, Pull Me.   This track begins with "I had a false belief, I thought I came here to stay.... we're all just visiting".  The lyrics are great on this album, and a welcome change from the angst-ridden verse of past.  The words appeal to a wider variety of listener, let's just say Eddie has grown up in the past 7 years since Ten.

Had enough about Eddie, well there is a band too.  A great band.  Possibly one of the greatest bands around right now.  I may get flamed by some people for saying so, but I believe it to be true.  They showed their expertise on the guitar in Ten back in '91.   They have continued to show their wide variety of musical talent through all of their albums and this is no exception.  There is a track on the CD, labeled as nothing but a red dot.  Jack Irons, the drummer, tackles the entire track.  It is an excellent showcase of his skill on drums and other percussion instruments.  The first single, Given to Fly has a guitar track very similar to Led Zeppelin's Going to California.  Some people claimed this as a rip-off of Led Zeppelin, but it is not so much a rip-off as evidence as to their musical influences.  The band transverses every kind of rock they have done before, and goes the extra step to make this an even more musical experience than any past album.  From the hard rocking tracks of Brain of J and Do the Evolution to the laid back rock of Wishlist and Low Light and on to the last listed track All those Yesterdays, with the style of John Lennon's Imagine to the final close with the hidden Eastern-flavored Humus (no doubt inspired by Nusrat Fateh Ali Khan) the listener is graced with musical experience in the form of Pearl Jam.

Thanks for the beauty guys.