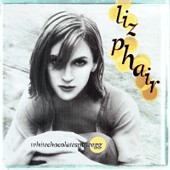 Time to Make Shitloads of Money
by: bill aicher

Liz Phair is back with a vengeance.  This time, it is with her third full-length album Whitechocolatespaceegg.   It has been 4 years since her last release, Whip Smart (an album which sold a half-million copies).  In the time between this album and the last, she has since gotten married, had a kid, and matured in a few ways.

Liz's past albums have focused on the epitome of GenX female music.  Most of it was about her love life, or lack thereof.  She liked to take the alternative rock boys and put them in their place.  Let them know she was boss.  In part, because of her, the female alternative music became what is today.  The two previous albums were Exile in Guyville and Whip Smart, respectively.  You might remember some of her singles from Whip-Smart, such as "Supernova" and "Whip-Smart".

Her new album is a little different.  As I stated earlier, a lot has happened between this and her last album.  The songs on the new disc focus more on the life she has lived recently.   The album is more mature than her earlier works, but not too much that she has lost the Phair flair.  "Perfect World" is a song of Liz's desires in the world, a great song to show she still has the kind of style to satisfy the indie-rockers.   "Johnny Feelgood" is the perfect example of this.  A song about a man with a kickass car, a tough guy, a man who is in control - classic Liz Phair stuff - great to get the bad boys all excited.

Songs such as the first single "Polyester Bride" focus more on her married or grown-up life. In this song she wonders "If I should bother dating unfamous men" - to which a reply is offered - "Do you want to be a Polyester Bride?  Do you want to go shopping for alligator skin cowboy boots that just went on sale?"  This is the lyrical style we are familiar with as coming from Liz, but the meaning behind it is something new.  For the first time we have Liz trying to figure out what kind of man she should marry instead of date.   The song also includes a great poke (I hope it is meant as a joke) at pop music, with a little guitar riff they toss in the end of the song - if you listen to the song you will be able to pick it out.   Very Third Eye Blind.

There are other changes on this album as well, all leading to making this her best work thus far.   "Baby got it Going" has a funky country / bluegrass musical style - an interesting twist in the album at a point where things are starting to sound the same.   Songs like "Uncle Alvarez" and "Only Son" delve into different aspects of family life, from the elders to the young children.  Sadly, "Headache" goes the way of most recent releases, including the synthesizer.   Luckily it is not overbearing, and does not become a techno song, but bands really gotta stop going that direction.  Luckily, Liz's voice would never work for a techno band, so it sounds like a funky little alternative song.  On the second last track, Liz breaks out her classic sarcasm - "Shitloads of Money".  The whole song is about money.  It is funny stuff - Liz continues to be creative, without losing her comedic flair.  "It's nice to be liked, but it's better by far to get paid".  With a refrain of "We all need a shitload of M-O-N-E-Y", how can you go wrong?

Liz has shown she is still one of the premier female alternative artists of the 90s.  The others in her wake should just take a seat, and let her go back to leading the way.  The only contender I can think of is Juliana Hatfield - who has a new album coming out soon.   We will have to wait and see - maybe I will set their albums up head-to-head.   Don't hold your breath for Juliana though.