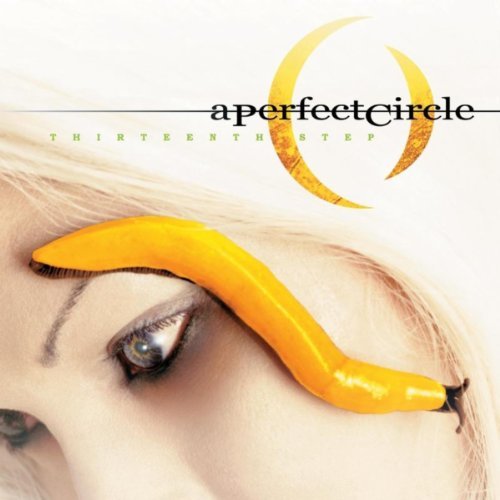 After giving this album repeated listens, I have concluded this to myself: everything Maynard James Keenan touches turns to gold. He can do no wrong. 11 years ago, he separated himself from the rest of the grunge pack with his incredible voice and intricate instrumentation. Now, more than a decade later, his second band releases The Thirteenth Step, the album that fans of Keenan have been waiting for. Because A Perfect Circle is traditionally a bit more melodic than Tool, we get a better showcase of his brilliant voice, backed by complex instrumentation.

The first single, "Weak and Powerless", while already blowing up at rock radio, is a great representation of the rest of the album. It starts out with the familiar chords, and you keep waiting for the distortion to come and for it to get much harder. But it doesn't and it's a great change of pace. And while Thirteenth Step doesn't have as much stand-out songs as Mer De Noms did, ("3 Libras" is one of the finest rock songs of the past few years, in my opinion) it has its share of great tunes. "The Nurse Who Loved Me" is just about as delicate as A Perfect Circle gets. It's not the strongest track, but Keenan's voice backed by strings is very close to pure bliss. But it all turns around with "The Outsider" and "Pet", the album's hardest tracks. It almost brings us a half a step back to the AEnima days.

This album may take a few listens to sink in, like all other works Keenan has done, but it is definitely a rewarding experience. It is always interesting to see where Keenan is on his quest for spiritual truth- on Lateralus he seemed to be on his way to finding something, and this album further establishes that. It takes a step in a new direction in the evolution of A Perfect Circle. While everyone else on the modern rock scene is either screaming or head banging, they do their own thing by bringing REAL music back. I respect them deeply for that. It will disappoint those looking for the screaming guitars, but please those that love them because they add depth to hard rock. The mainstream really needs a dose of this album right now.
19-Sep-2003 9:15 AM