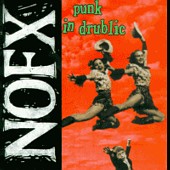 The Brews
by: ben

The greatest punk album ever. Those are the only things a punk rocker needs to know about NOFX's seventh release, Punk in Drublic.  This album has so many classic numbers on it I wouldn't know where to begin, except from the start.

Over 15 years of playing underground punk, NOFX has released ten albums in their career.  The best by far is Punk in Drublic.  I'm going to review each song seperately, because each song is a different diamond on the record. LINOLEUM: Fast paced, classic song.  Fat Mike's lyrics in this songs are supurb. Anyone denying this as "bad ass" will be shot.

LEAVE IT ALONE: NOFX's hit. Well sorta-hit. NOFX never releases videos on MTV nor do they want to be played on commercial radio stations. This is the song Epitaph Records filmed a video for but NOFX didn't sign it over to MTV.  If you'd like to see this video go to www.epitaph.com or buy the NOFX home video, Ten Years of Fuckin Up.

DIG: Immediately preceeding "Leave It Alone", "Dig" is one of the low points on the album.  Every time I listen to "Leave It Alone" however, "Dig" sort of is a necessity after it.

THE CAUSE: Another classic song!  Pure punk rock by the mohawk full.  "The Cause" is all about what we punkers stand for, so just leave us alone.

DON'T CALL ME WHITE: NOFX's other sorta-hit. I'm not sure if they ever filmed this one but they did release a single with the track "Drugs are Good" on the flip.  Above average song (like all the others), and a friend of mine who likes NOFX, has to hear this song all the time.

MY HEART IS YEARNING: Best joke song NOFX has ever done. Caribbean music with hilarious lyrics. I don't wanna give it away.

PERFECT GOVERNMENT: Yet another classic punk song!  "How did the cat get so fat?" I don't know, ask Fat Mike.  Not written by NOFX, but stolen from a friend of there's original acoustic number.  NOFX turned into something cool. By the way, he wrote the song for NOFX as a present. :)

THE BREWS: Now before I talk about the Jewish-Nazi song, I better let you know that this is the definitive NOFX song.  The one that stands out high above all the rest. "The Brews" (oi oi) is the greatest punk song in the history of mankind. Ask anyone who likes NOFX.

THE QUASS/DYING DEGREE: "Dying Degree" is your average NOFX song. After the impact of how extremely awesome "The Brews" is you need something to calm down.

LORI MYERS: Here's a big classic song.  It's more of a story-song, but it has some really tight lyrics and really kick ass music.

JEFF WEARS BIRKENSTOCKS: This song is unbelievably great in it's own special way. There seems to be a big debate between punkers between this song and The Brews for best NOFX song.  Don't know why. It's funny I thought, but not as great as The Brews.

PUNK GUY: Just a shade over a minute, this song relates to all the most famous punk rockers and even my birth place Green Bay, Wisconsin.  Sometimes I think this song was written for me.   But then I laugh and dye my hair blue.

HAPPY GUY: Worst song on the record. But still a good song.

REEKO: Kick ass. Half slow-acoustic ska-type riff and the other half power punk. Reeko kicks more ass then we'll ever know because we can't relate to how cool this song really is.   Most people diss it, but there are a few who see the beauty in it.

SCAVENGER TYPE: Best chill song in the world. I love the lyrics to this song.  I think I've rambled long enough anyway.