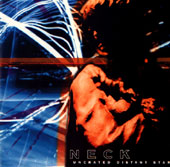 Would You Like to Swing on a Star?
by: mark feldman

Though their band name leaves much to be desired, Neck are an extremely promising 'power trio' recording on the Teenage USA label in Toronto, featuring Andrew McAllister on vocals and bass, Dave Rodgers on guitar, and Paul Boddum on drums. Their sound is very punk influenced, but very melodic at the same time, McAllister's surprisingly gentle voice offsetting the layers of guitar noise. This is somewhat reminiscent of the grittier side of the Replacements, or the less gritty side of early Husker Du. Fans of that particular sound will have a lot to get excited about with Neck.

Uncrated Distant Star is but a glimpse into what this band can be capable of. "You Caught Me Daydreaming" is a hard-driving look at the end of a relationship. "You Are Not Alone" is psychedelic Monkees-gone-punk at breakneck speed. "Today's Bride" is artsier, it seems to be about directing a home movie, while "Projector Lamp" weaves the prettiest melody of the album around some fairly abstract musings that are kind of difficult to understand. The last two tracks, "Coup de Grace" and "So Much for Pathos" lean more towards the 'shoegazer' rock of the early '90s; think Ride, Lush, all those one-word bands, which of course puts Neck in fairly appropriate company.

If there's a problem with this band, it's their apparent inability to stretch its fairly original ideas into full songs with any sort of lasting meaning. None of Uncrated Distant Star's seven songs lasts more than 2:17, and the entire CD clocks in at just over twelve minutes. Maybe it isn't supposed to be a full length release, but even so, Neck should get some self-esteem, realize that they have something to say, and take a few risks. It'll be interesting to see what they can do with 45 minutes when and if it becomes time for an honest-to-goodness album.