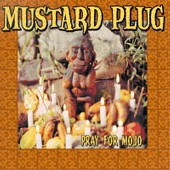 An Album for the Plug Faithful
by: smoke

The recently released third effort of Michigan's very own Mustard Plug follows right in the footsteps of the two previous. What was once a lesser-known member of the midwest's sprouting third wave ska scene has gained nationwide recognition through extensive touring and major compilation appearances. Easily one of the most consistently impressive ska acts to see live releases its newest, Pray For Mojo.

Over the course of Big Daddy Multitude and Evildoer's Beware, the "Plug" has built a reputation of songs with catchy enough rhythms that you swear you've heard the song before, even though you just bought the album. With lyrics which playfully mock life's experiences, it's not hard to understand how a loyal following has been built.

Pray For Mojo follows suit with another 12 upbeat tracks which show how Mustard Plug likes to dabble back and forth between Third Wave and punk guitar riffs. "Not Giving In" brings in a newer flavor for the band which is both one of the most original and interesting tracks on the album. The next three move through trademark strong songwriting by the band until someone decided to stick Mustard Plug in a room with Murphy's Law to come up with "Throw a Bomb." "Lolita" plays around with the movie everyone loves to hate and will definitely be a big request at shows.

Overall, it's a great follow-up to the previous two albums and shows how an original ska song can be written without falling into the cookbook recipes for ska songs as of late. Unfortunately, with the exeption of "Yesterday," Pray For Mojo fails to find a way to incorporate the incredible live energy that really makes the band jump. Buy the album, learn the words, see them live to get the REAL Mustard Plug!