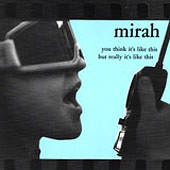 Couldn't Like it Better, Even If We Slept Together
by: marla tiara

The first time I heard Mirah’s first full-length album, I was across the room talking to a friend, not really paying attention. I remember thinking that this album was very sparse in a good way, full of breathing room between the plinky sounds of the guitar or the out of tune piano. The next time I heard the album, I sat down and really listened. And I haven’t stopped listening since then.

In between the empty spaces framing her songs, Mirah sings in a plaintive, girlish and yet rough voice, about love lost, about relationships and friendships, about sex and loss. If I had to compare Mirah to anyone, I might say she is a touch Liz Phair, a smidgen of Chan Marshall, a drop of Mary Lou Lord.

Other songs, such as Murphy Bed, are more explicit. The song begins with her singing to a missing lover, “How’s the road? Are you getting lots of action out there? I hope so.” Later in the song she adds in a cautious yet oddly seductive manner, “And when you get home you can tie me to the murphy bed, lets do all the things you said,” and you know exactly what she’s talking about.

One song simply states, “You’ve got pollen on your nose,” and you feel like you’ve been let into a private scene where two people notice the smallest things about each other.

Every track on this album is a standout, and I can’t remove the CD from my CD player. It’s hypnotic and refreshing. Mirah is definitely someone to watch in the indie-girl arena.