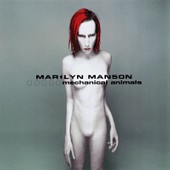 Marilyn Manson’s 1996 album Antichrist Superstar catapulted them from the status of a somewhat obscure Florida shock-rock, electro-punk band to that of international superstars. Manson’s unmistakable image was plastered all over the airwaves, MTV, and the uproar over the ensuing tour made headlines all across the country. EVERYONE knows now who Marilyn Manson is.

So where do you go from there?

Forward to the future, that’s where. For the follow up to Antichrist, Manson jettisoned ever-present Trent Reznor (Nine Inch Nails) as producer and, after a brief stint with the Dust Brothers, settled with Michael Beinhorn as producer. The end result is an album that does not try to be Antichrist, but is another (mechanical) animal altogether. Mechanical Animals is a slick nightmare vision of an alienated, over-drugged, over-sexed society that leaves behind the heavy, distorted electronics of Antichrist for a more traditional, polished rock sound. It tells the story of Marilyn’s twin characters, an alien being of some sort that came down to earth, and the rock ‘n’ roll "dopestars" Omega and the Mechanical Animals, and their obsession with Coma White, which is alternately (or simultaneously ?) a woman and a drug.

From the opening track, The Great Big White World, the difference is apparent. The electronics underneath are more reminiscent of Billy Corgan’s recent material than anything Manson had done previously. The first single The Dope Show is next, with its throbbing, shambling bass line that is now familiar to us from MTV. Manson shows they can still rock, though, with intense slamming beats in tracks like Rock is Dead and Posthuman. The song most likely to be selected as the next single, I Don’t Like the Drugs (But the Drugs Like Me), (which gets my vote for Best Song Title of the Year) has a funk-like feel, and is one of those songs you just -can’t- -get- -out- -of- -your- -head-. But the track that stands out the most to me are The Speed of Pain, a slow, depressing love song, which shows much more emotional range than Marilyn has before.

Those expecting Antichrist Superstar Volume II will surely be disappointed in Mechanical Animals. On this album, Marilyn Manson show a willingness to change and evolve their sound, yet still manage to retain their sonic identity. The more pop-friendly sound of this album, together with Manson’s masterful image manipulation and PR skills should sell a lot of records. Until then kiddies, roll up your sleeves; it’s time for recess.