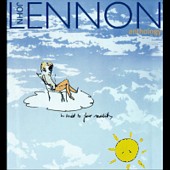 Imagine There Was No Lennon
by: mark feldman

Compiled meticulously and painstakingly by Yoko Ono, Anthology is not a 'greatest hits' package, but rather a deep, complex, and often frustrating portrait of perhaps the greatest genius rock and roll has ever known. John Lennon needs no introduction - we all know who he is, what group he was in, and how his life was prematurely ended at the dawn of the '80s, arguably the decade that would have benefitted the most from his genius. These four CDs don't really alter his image, either for better or worse, but rather tell us a few things we don't know - how much of his solo material developed, how his off-stage life affected his writing, and even a few unreleased songs here and there. Be forewarned - if you love the Beatles and want to hear the most complete artistic statements of the post-Beatles Lennon, this is not the place to start; you'd be best off with Plastic Ono Band, Imagine and Double Fantasy, or at the very least, the double CD Lennon Legend. Anthology is more akin to the Beatles' recent compilations of the same name - a nitpickers guide to John Lennon, if you will.

So what do all of us nitpickers out there have to look forward to? The early versions of the classics are as revealing as anything else here. "Imagine" actually got more spare as it progressed - the version here is engulfed by a thunderous church organ, giving the song a far denser quality. But more often than not, even Lennon was the victim of studio mush - his anti-McCartney rant "How Do You Sleep" is rendered even more powerful sans the string section that eventually watered it down. "Working Class Hero" comes across as the acoustic ballad it was meant to be. We only hear "Mind Games" in its infantile form here, but as a low key piano demo it's just as stirring as the version that ended up on the album.

The studio banter is a bit self-indulgent, but since the purpose of this four CD set is more or less to be indulgent, it's not out of place. Lennon and Ono were separated for several months in 1974-75 as Lennon took an abrupt turn to record covers of '50s songs for his "Rock and Roll" album. The material on disc three represents this troubled period painfully well, including several rather heated dialogues between Lennon and producer Phil Spector, as well as a rather crude parody of "Yesterday." But more enjoyable little tidbits are strung throughout the other three discs - "The Great Wok," in which John masquerades as a philosophical guru and makes New Year's resolutions for 1979, a few untitled "Satires" in which he pokes fun at Bob Dylan, and "The Rishi Kesh Song," a hilarious jab at the pseudo-Far East tendencies of his ex-bandmate George Harrison. And of course, the false start to "God," in which Lennon has to start over because, in his words, "I was thinking of me bum!"

The most rewarding part of this anthology coincides with what Lennon thought to be the most important part of his own life - the last years, in which he began to see his son grow up. There were no John Lennon albums between 1975 and 1980 - in this period he decided to take a break and be a father / husband, but he was still writing songs over those years, which were eventually released on 1980's Double Fantasy and 1984's posthumous Milk and Honey. On the fourth and final disc, Ono does a brilliant job of documenting John Lennon's final burst of songwriting genius and intertwining it with his role as a father and husband, including snippets of John talking to five-year-old Sean, and relying heavily on his family-related songs such as "Dear Yoko," "Beautiful Boy," "Grow Old With Me" and the unreleased-until-now "Life Begins at 40." In the liner notes, Yoko says of 1980 that "there was an acute sense that time was accelerating, and that we were caught in a spiral that was moving at the speed of light." As we listen to and marvel at the songs, such as "Watching the Wheels" and "Nobody Told Me," that came to Lennon in his final, most productive year, it becomes all the more maddening that he was murdered just after the release of Double Fantasy.

Anthology stands as a monumental achievement, both on the part of John Lennon for having created these timeless pieces of music even in their raw form, and on the part of Yoko Ono, for reliving that now-distant part of her life and harnessing just enough of the hundreds of hours of studio tape to make a collection listenable enough for people who want to hear real songs, but eclectic enough that it is a worthy supplement to the collections of even those who already own all of Lennon's albums. The artwork is cool, too.