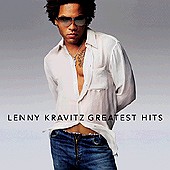 When Will I See You Again
by: steven jacobetz

Lenny Kravitz is one of the best and most important artists in music today. He carries the flag for honest rock and roll, as well as demonstrating unshakeable musical and moral integrity.

Most of his songs deal with God and spirituality, love for oneself as well as for your family and significant others, but he has also tackled topics such as racism and the dangers of technology overload. Kravitz is the neo-hippie for the 21st century.

The one who proclaimed "Let Love Rule" to the world right at the end of the 80s, the decade of Reagan trickle-down economics and yuppie greed. His voice has seemed at times like one of the few sane ones in the musical mainstream amongst a wilderness of depravity. In today's image-obsessed culture, his message needs to be taken to heart by as many people as possible. That's why it is so great to have this greatest hits package which distills his first five albums, representing his first decade plus of work, into one easily digestible hits package.

This is the perfect set for long-time fans who have liked his singles on the radio and MTV but have never bought the albums. Likewise, it's the perfect introductory album for a new generation of fans.

The musical essence of the man is all here, from the ultimate peace and love anthem of "Let Love Rule", to the techno-futurism of "Black Velveteen". There are the ones you'll think of right away, like "Are You Gonna Go My Way?", in which Kravitz assumes the voice of Christ; the ode to freedom "Fly Away"; the desperate love song "It Ain't Over Til It's Over", and his cover of the Guess Who's "American Woman", originally done for the soundtrack of Austin Powers: The Spy Who Shagged Me.

Also included are songs which are just as good if slightly lesser known, like "Always On The Run" featuring a guitar solo from former Guns 'N Roses lead guitarist Slash, whom Kravitz went to high school with, the emotionally powerful song of self-belief "Believe"; the anti-racism message of "Mr. Cabdriver", and the commentary on the sex, drugs and rock and roll lifestyle, "Rock and Roll Is Dead"

The new single "Again" is also on the album. While the song is not as musically and lyrically powerful as his previous work, it is a good song with a catchy chorus. It definitely does not sound out of place in this collection.

The only reason this CD doesn't get a perfect rating is because it seems a little indulgent at 15 tracks. It would have been an even more powerful statement if it had been slimmed down to 10 or 11 songs. Always leave the audience wanting more.

The best thing about Lenny Kravitz is that, barring tragedy, he is only beginning his musical journey. He may have cut off his dredlocks several years ago, but unlike Sampson, he didn't lose his power with his hair. He is as creative and relevant as ever.

Expect even better things from him in future years which will easily fill a second Greatest Hits volume. The world waits anxiously.