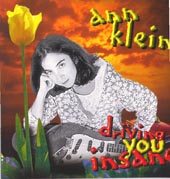 Do Ya Dead
by: kriste matrisch

Whoever said "Don't judge a book by its cover" is certainly right. In this case, it's don't judge a CD by its cover. When I first got my hands on this CD, I thought, "Oh cool, another poppy CD to review that will be very pleasing to listen to."

When I first heard it, though, I wanted to turn it off. What the hell is this? This isn't something I would listen to on my own. Then, I thought, "Kriste, come on, give her a chance. Listen to it... let the music become you."

So, I gave it a chance. I listened to the CD several times until I couldn't go a day without not wanting to hear it. I still couldn't believe that this tiny woman on the cover had such a deep, sultry voice, nor did I think such a little body could produce such artistic and rocking guitar riffs.

I found myself really impressed with Ann's guitaristic abilities, and I'm normally not a fan of the electric guitar, but Ann is really talented. I feel that she puts as much passion into producing such music as does Ani Difranco. In fact, "The Love I Hate" features just the awesome talent of her playing. Her voice is just an added bonus to this talent.

I also am totally in love with the fact that she wrote all the songs (with some collaborations) on the album. I get a kick out of "Piece" ( RealAudio Clip ) because when I first heard it, I thought she was using 'peace' ironically, as she talks about having a loaded gun and getting excited about that. The other song that I'm all over is "(I Wanna) Do Ya." ( RealAudio Clip ) Her voice is sultry as ever as she sings these fun lyrics: "Let me just get on top/ Let me just scream and shout." And perhaps we can all relate, "All I need is one good night."

My words simply can't tell you how cool this rock/bluesy album is, you just have to pick it up for yourself.