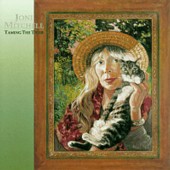 From the opening steel drums of "Harlem in Havana" to the intricate guitar work on the instrumental "Tiger Bones," this album is a mystical journey into the current life of one of rock’s most enduring songwriters. It doesn’t grab you instantly, but beckons you to listen closely and discover new meaning in its words and sounds each time.

Joni Mitchell is about the only one who can get away with singing lines like "during times like these, the wise are influential," "may your skies be blue and your love blessed," and "they weren’t the wing-ding type," without sounding pretentious. But she isn’t afraid to make simple statements either, such as "an angry man is just an angry man / but an angry woman… bitch!" In contrast to most of her albums since 1980, there is no underlying theme or concept; on "Taming the Tiger" we get all kinds of storytelling, some of it personal, some of it political, some of it social. The music is not unlike most of what she’s done in the ‘90s, but there are still plenty of surprises. Wayne Shorter adds some beautiful fluttering soprano sax to the mix, Larry Klein’s bass work is first rate as usual, and there is considerably less studio clutter than there’s been in years, making room for Joni’s acoustic guitar to shine through like it hasn’t since "Blue." Perhaps the biggest surprise is how positive she is - the confessional "Love Puts On A New Face," "Stay in Touch" and "The Crazy Cries of Love" actually have happy endings. "My Best to You," which reads like a cheesy Hallmark greeting card, is the only instance where one wishes Joni were still depressed. The real winner of the album is "Harlem in Havana" - the eccentric characters and lilting rhythm recall her most energetic songs like 1975’s "In France They Kiss on Main Street" and 1991’s "Ray’s Dad’s Cadillac."

What’s missing from this album is a good old-fashioned song. At the peak of her popularity, Joni Mitchell used to insist she had much more in common with rockers like Led Zeppelin and Neil Young than she did with her contemporary confessional songstresses like Carly Simon. But the one attempt to rock out on this album, "Lead Balloon," comes over like just that - she sounds like she can’t up with the beat. And the slower songs, though very tuneful, don’t have the strong, memorable melodies of the similar works on her comparable earlier albums. She tries too hard to make epics, and it ends up taking several listens just to distinguish many of these tracks. In other words, one shouldn’t listen to "Taming the Tiger" like a straight-up rock and roll album. In the title track, Joni Mitchell derides the "hoods in the hood / and the whiny white kids… formula music, girlie guile / genuine junkfood for juveniles" that currently clutter up the airwaves, as if she is above it all. Which she is, but she didn’t used to have to tell us that.

It’s been twenty-five years since Joni Mitchell turned her back on the confessional lyrics and spare, folkish arrangements that made her a superstar, and still the woman gets no respect. Many who adore "Blue" and "Ladies of the Canyon" don’t even know that she hasn’t ever gone more than three years without new material since then. Though her excellent 1994 release "Turbulent Indigo" deservingly won the Album of the Year Grammy Award, her post-early ‘70s work has for the most part gone unnoticed. "Taming the Tiger" is probably not going to change that - compared to the slap-in-the-face social commentary of some of her recent releases, "Turbulent Indigo" in particular, "Taming the Tiger" is a gentle tap on the shoulder. However, it’s a fascinating release nonetheless, maybe not as gripping as some of her others, but true Joni devotees won’t be disappointed.