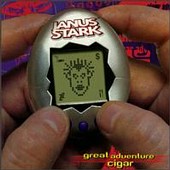 King of the Common Street
by: bill aicher

Welcome to the world of pure genius, for what else can you expect from a band consisting of members named Gizz Butt, Shop, and Pinch. These are the men of Janus Stark - one of the latest alternative rock bands from our mother country - England. With Great Adventure Cigar, now you too can find out what it would be like if Prodigy's live guitarist fronted a band, because, amazingly enough, Gizz Butt is Prodigy's live guitarist.

Chances are you have never heard of this member of Earache / Trauma Records. That is, unless you have seen the movie Disturbing Behavior. Their song "Every Little Thing Counts" was the first song on the soundtrack, joining other members of Trauma Records including The Flys. If you are one of the few who have heard them before, congratulations. If not, well you are lucky I am introducing you now.

Janus Stark. . . well what can I say? They certainly are not anything totally out of the ordinary - don't expect these guys to change the face of music, but who really gives a damn? Their music is still fun. With a casual listen the guitar sounds close to the style you find often with new-wave punk. If you listen closer, you will find a lot more though. The riffs are more complicated and there is a generous helping of catchy licks and even a few solos. The bassist is busy throughout the album, shining through the most in "Floyd, What are You On?"

Gizz Butt's vocals are the part of the album I had the biggest problem with. Note I said "had." After a few listens it grew greatly upon me. This is most likely due to the differing in style he uses throughout the album. Too be frank, the first song got on my nerves, as the vocals sounded like a mix of Perry Farrell (Jane's Addiction / Porno for Pyros) and Johnny Rotten (Sex Pistols). After this track I was amazed. This band did something most of today's alt-rock bands don't do - they changed styles. Now, the changes were nothing drastic, but just enough so as to stop the album from sounding overly repetitious. By the time I was halfway through track two I was interested. By the time I was through track six I was hooked.

Perhaps the thing that amazed me most was the quality of their lyrics. When I picked up the cd I did not expect much from Gizz Butt & Co. I was elated when I found they actually had a point to get across in most songs. My personal favorite is "Panic Attack" which took the idea of teenage rebellion to a new level. It is an interesting story of a child who has taken enough from his parent - a child who defies the commmon boundaries and fights back. "Reach for the belt and find it's getting used on you."

Be not afraid, popsters of the world. Janus Starks has plenty in store for you as well. "Every Little Thing Counts" is pure pop-rock. You can sing along! I bet you are excited now. If you don't like the power-pop vocals and want quality instrumentalism, the song will still fit you - it has some excellent guitar work. This is the way the whole album works. Most fans of alternative rock should be pleased by this album from our British brothers. Songs like "Floyd, What are You On?" and "White Man Speak with Fork Tongue" talk to our generation, but take us back a few years to the time when we used to hear good music on the alternative rock stations.