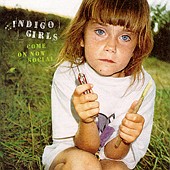 In these fickle days it's tough even for artists of relatively-recent vintage to compete with the latest flash in the pan. The Indigo Girls' latest makes us think for a moment they are trying to sound 'alternative' by kicking off with a feedback-drenched bang and diving into the breakneck anthem "Go." But in that very same song, Amy Ray sings a telling line; "I know you kids can stand the rain / I know the kids are still upsetters / 'cause rock is cool but the struggle is better."

Come On Now Social rises above the Girls' last several releases for precisely that reason - it struggles, pulling and turning in so many directions, but always returning to the spiritual optimism that has always set this duo apart from its whining progenies that dominate adult alternative stations and Lillith Fairs across the country.

The variety on this album is endless - "Go" is joined in the Indigo Grunge department by the soaring "Trouble" and the desperate "Compromise," but this is not an all out rock album by any stretch. Amy and Emily try a little traditional-sounding folk in "Ozilline" and "Faye Tucker," and "Peace Tonight," the first single, is almost danceable. "Andy" and "Soon to be Nothing" are a typical pair of Emily Sailers ballads. And "Gone Again" and "We Are Together" are the best Indigo Girls songs to sing along to at the proverbial campfire since "Closer to Fine."

But what sets "Come On Now Social" apart from 1997's somewhat disappointing "Shaming of the Sun" is the willingness of the two Indigo Girls to struggle with their own identities. The usually abrasive Amy Ray is vulnerable like never before in the countryish tear jerker "Gone Again," spiritually hopeful on the organic funk of "Ozilline," and uniquely comforting on the torch ballad "Sister." And the traditionally calmer and more sentimental Emily Sailers is comparatively preachy on the smoothly soulful "Peace Tonight," romantically aggressive on the excellent angular pop of "We Are Together," and simply more Amy-like on both "Trouble" and "Cold Beer and Remote Control" (ever thought there would be an Indigo Girls song with a title like that?) There may be fewer harmonies than usual, but the fact that Amy and Emily are participating equally in all aspects of the music more than makes up for that. More than ever, this disc sounds less like two separate singers in a reluctant business partnership, and more like a magical yin and yang on the level of Lennon / McCartney or Buckingham / Nicks, polar opposites learning just enough from each other to meld their separate styles into a unique duality.

Don't let the fair weather fans who still yearn for another Rites of Passage tell you any different. This is the Indigo Girls' best album, and if they continue to mature at this rate, their story is far from over.