Where Have All The Merrymakers Gone? Album reviews.

Home » Where Have All The Merrymakers Gone?

Where Have All The Merrymakers Gone? 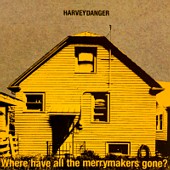 Everybody's Coming to Get Me
by: bill aicher

"I'm on a private helicopter with my favorite ex-girlfriend".  Interesting lyrics. Interesting band.  How about "Hear the voices in my head, I swear to God it sounds like their snoring".  Kind of twisted, not too much, but still a bit out there.

Where Have all the Merrymakers Gone? is Harvey Danger's first album.  Considering they are just another alternative rock band, this is a pretty good album.  Sean Nelson has an interesting voice, and the album sounds rough and underproduced.  Very raw.

There is not too much to say about the album except that it is nothing new to squawk about.  Harvey Danger is not treading on new grounds with their Nirvana meets Matchbox 20 sound.  We have heard it all before.  Not to say there is anything wrong with the album, it just does not have the originality to stand out from the crowd.  Their sound is fairly similar to that of other newcomers such as Atheneum or Eve 6.  They are all good bands, but that is it - good, not great.

I know every one of you has already heard rock bands with guitar, bass, and drums.  Classic stuff here, with an off-key voice.  Sean Nelson does not sound like your classic vocalist.  His voice is not bad, far from it.  I think the voice is one of the things that sets the band apart from others.  That and the lyrics.  And this band has some strange lyrics.  Their current single "Flagpole Sitta" comes from an offbeat/nonmainstream kind of mind.  "They cut of my legs now I'm an amputee, God damn you."  and "I'm not sick but I'm not well".  Very pop-rock.  They appeal to the alternative style of thinking, which is what makes this band sell.  Let's face it, alternative people like to think they are different.   The lyrics to this band are different.  Their style is a little different. Fans of alternative rock should pick it up.  Or if you like a pop sound, check it out too.