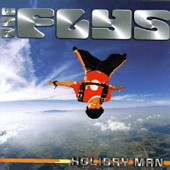 I'll Have Another Plate of Attitude
by: bill aicher

"Aahh-oooh, got you where I want you."

I am sure this rings a bell in many people's minds. It is, after all, one of the more popular songs these days, as long as you are familiar with alternative rock. The song is simple, nothing too complex in the musical department, and even less in the philosophical. So why have The Flys gained popularity through it? The answer lies in the simplicity of their music itself. Theirs is the laid-back alternarock sound we have not heard in a while - the sound of a teenager / twenty-something who frankly just doesn't give a damn. I am sure we can all relate.

This relation is what makes "Got You (Where I Want You)" such a popular hit. What else screams "big hit" better than a song about picking up women, coupled with one of those ever-popular "aah-oooh" singalongs? However, no matter how much this song may be a hit with the kids, the rest of the album fails to follow suit.

The Flys hail from Orange County, California. They are a bunch of surf boys who live the life we all wish we could. Vocalist Adam Paskowitz states "We take a bite out of life." A fitting quote coming from a band who's album cover features a photo of drummer Nick Lucero skydiving. This lifestyle is what their songs are about. Their lifestyle is the Cali lifestyle.

So what kind of music does stem from this lifestyle? Well nothing too deeply intelligent, you can rest assured of that. Throughout the album you will find songs about the complexities of the minds of women to the magical wonders of basketball (yes, basketball). Hey, at least they are covering familiar territory. Only a rock star can try to get women with lines like "I will loan you my credit cards / I will give you my car / I will roll out the red carpet for you / I'm gonna make you a star." But hey, they're big rock stars, what else can you expect? If perchance you would just like to hear a nice little love song, you could skip to the final track for a "Sexual Sandwich."

Well, seeing as their vocals are just not tempting me as the Sirens do, I will move on to other aesthetic qualities. Sadly, I still fail to find much value in this category as well. The guitar does have a harder crunch than most of the more popular alternarock lately, but it is nothing we haven't heard before. Can you say "Nirvana" ? I can. Now don't get me wrong, there is more talent than simple power chords here, (a la Kurt Cobain) but not much. The addition of a three-to-four note riff, or the glorious use of a whammy bar does not qualify as any kind of grand talent. The band only strays from this all-too-often heard musical style on two tracks - "The Family" - a funky little track that sounds like something from Fly and the Family Stone, and "Sexual Sandwich" - which sounds like a classic "feel like making love" track. Now these two tracks - those are quality.

By far the most annoying aspect of this album is the blatant overuse of their vocal decoder, the "Paskowitz Nebulizer." While it is interesting to know that the decoder was created by Adam, this hardly allows for the misuse it receives on this album. I for one would like to hear a normal voice somewhere. The vocals on every rock tune on this album gets a beating from this damned machine. It would have been much more effective had it been used much more sparingly. The only track which does not receive the treatment of the "decoder of death" is "Sexual Sandwhich" - by far the most original work on the album.

Holiday Man is nothing to squawk about. In fact, it is hardly worth the occasional peep. With the exception "Got You (Where I Want You)" and possibly future alternapop hits "Holiday Man," and "She's So Huge" I have no idea what the buzz is about. The music and instrumentation is well-worked, but the lyrics just leave much to be desired. The biggest problem is in the overuse of the vocoder. Their music is feel-good, nothing more. If that is what you are hip to, dig right in. If you are looking for more, I suggest you look elsewhere.